HAVANA TIMES, Dec 15 — This past November 11, part of the house collapsed where the family of 46-year-old Irina Pino lived. But this is not the typical story of a Cuban house that collapses because the construction is too old and has not been repaired for many years.

Irina Pino: The downstairs neighbors started fixing up their unit, making repairs. Out on the front porch they removed the cornice of a load-bearing column. First the ceiling started to crack, but then there was this tremendous crash – the balcony and two out of the three bedrooms of our apartment just caved in.

HT: Was the downstairs unit damaged too?

Irina: The porch had some damage, but that was all; their place is OK.

HT: You said that your house was built between 1919 and 1920, which means it’s nearly a century old. What condition was it in?

Irina: It hadn’t been repaired in a long while. Out front, a very large bay tree covers the entire front of the house, which is why there was always so much moisture on the balcony. But if the neighbors hadn’t started all that hammering, nothing would have happened.

HT:  How can you be so sure that it wouldn’t have collapsed when you say it was built around 1920 and that it hadn’t been maintained for many years?

Irina: That’s what the architect who made the report said. Perhaps, it would have had problems at some point in time, but much later. What just happened was because of the hammering by the neighbors. The load-bearing column was what held up the whole façade.

HT: So the downstairs residents should compensate you.

Irina: Of course, but lawsuits don’t work here. What’s more, these people have a child who’s mentally disabled, in addition to being physically handicapped. They are a social services case. They don’t own any property, not a car, nothing that could be used to offset the damage. We could file a claim, I suppose, but we wouldn’t get anything out of it.

Though Irina was born in this house, located in Vedado, she has not lived there since she married. Now she lives in Miramar with her husband and her twelve-year-old son. Her parents, her sister and her brother in law are the ones who now live in the Vedado house.

But a little more than one year ago, Irina’s mother fractured her hip and the father suffered a stroke.  Moreover, they can’t be separated. They’ve been married for more than sixty years. Since then, they both have been living with Irina, in Miramar, but they hope to move back to their Vedado house. 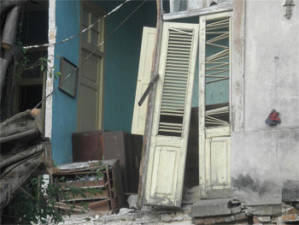 Irina: I haven’t said anything about what happened to the house because they’re too old. My mother is 80 and my father is 82. My fear is that all of this might upset them too much and affect their health.

Reinforcement struts have been put up throughout the interior of Irina’s house. The reality is there is no assurance that the house will be habitable when the final building assessment report is issued after the demolition work.

HT:  What solution are you pursuing for your sister and her husband? Where are they staying now?

Irina:  They’re looking for a lawyer, to see if this can be solved as a housing case, because if my parents decide to return, there’s only one room in the house – if it even turns out to be habitable. There’s not space for all four people. But that’s something that’s going to take a long time. And if they have to move into a shelter…who knows. I have a friend who spent ten years in a one, after which time they finally assigned her an apartment. During those ten years, she was miserable, because shelters are not good places to live.

HT:  How have your sister and her husband taken all of this?

Irina:  My sister has taken it very badly. She’s always had a nervous condition, so it only worsened when the collapse occurred. The noise was thunderous, almost staggering. We had to admit her into the hospital. Now she’s like a nomad, moving from one place to another. A person in her condition should own their home. They’re the ones getting the worst end of all of this. 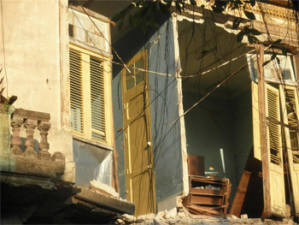 HT: Where are they staying? I suppose they are not staying at the damaged home?

Irina: Sometimes they do stay there… but they come and go. They can’t stay there all the time because it’s dangerous. Sometimes they stay over at the husband’s family’s place, which is tiny and also in poor condition with a lot of people living there.

HT: What struck me is that in the midst of all this, you had the composure to take photos of the disaster.

Irina: I saw that everybody passing by was taking pictures. It became a kind of tourist attraction with people taking photographs, filming. So I decided to take pictures because that was the house where I was born.

People passing by wondered why I took so many pictures, and I told them that it was my home. They were shocked; they were amazed at how calmly I was taking all of this. It has indeed affected me, but not outwardly. I’m not going around crying about it all the time, like some people who don’t even live there but spend their time whining about it and wondering what will happen.

People know of the hardships that follow the loss of a home. Irina is not alien to that reality, but she tries to take it with optimism and wisdom. 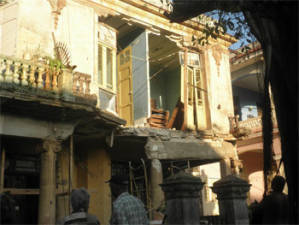 Irina: I hope there’s some solution to all of this. My parents won’t wind up homeless. They are with me, at least. That’s what concerns me most. A house is a house, it doesn’t last forever. Everything has its birth and its death. Nothing is forever and neither are we.

Days after Irina told me this part of the story: the demolition work of the house was completed. The house, in which Irina was born is not habitable anymore. The furniture had to be taken to her house in Miramar, because she feared people would steal them.

Two doors had already been stolen. Even the workers carrying out the demolition works were stealing things. She had to tell her parents that their house in Vedado was being repaired. She doesn’t know when and how she will tell them the truth.

Her sister and her brother-in-law have been left only with the option of going to a shelter. But there is no capacity for more people in the place. The sister has been at the hospital for twenty days now.