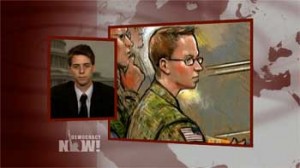 HAVANA TIMES — For just the third time since he was arrested over two years ago, alleged Army whistleblower Bradley Manning was seen by the public this week at a pretrial hearing in a military court at Fort Meade, Maryland.

The 24-year-old private is accused of leaking hundreds of thousands of documents to the whistleblowing website WikiLeaks, including secret files on the Iraq and Afghan wars.

Manning’s attorneys are seeking the dismissal of 10 of the counts against Manning as well as the release of hundreds of thousands of documents relating to the alleged leak. We speak with Kevin Gosztola, a civil liberties blogger at Firedoglake.com who has been attending Manning’s pretrial hearing.

JUAN GONZÁLEZ: For just the third time since he was arrested over two years ago, alleged Army whistleblower Bradley Manning was seen by the public this week. His three-day pretrial hearing wraps up today before a military court at Fort Meade in Maryland. Manning faces 22 charges, including the capital offense of aiding the enemy, as well as violating the Espionage Act, computer fraud and theft of records. The 24-year-old private is accused of leaking hundreds of thousands of documents to the whistleblowing website WikiLeaks, including secret files on the Iraq and Afghan wars.

Manning’s attorneys are seeking the dismissal of 10 of the counts against him. His defense team says the counts are either unlawfully vague or fall short of amounting to a prosecutable offense. Manning’s military trial is scheduled for September.

AMY GOODMAN: Earlier this week, his legal team submitted a motion calling for the U.S. government to release hundreds of thousands of documents relating to the alleged leak. The government is reportedly in possession of 250,000 pages of documents related to the case but has refused to turn them over to Manning’s defense team.

To find out more about the military trial, we’re going to Washington, D.C., to talk to Kevin Gosztola, civil liberties blogger at Firedoglake. He’s been attending Manning’s pretrial hearing. He’s co-author with Greg Mitchell of the ebook Truth and Consequences: The U.S. vs. Bradley Manning.

Welcome to Democracy Now!, Kevin. Tell us what’s happened so far in the pretrial hearing.

KEVIN GOSZTOLA: Well, to sum it up, I would say that this proceeding has been all about discovery of evidence. David Coombs, who is Manning’s defense lawyer, has been trying to get the government to provide him with documents that would show just how the government responded to the leaks that came from the WikiLeaks disclosures. Particularly, he’s been interested in the U.S. embassy cables. So, a lot of the focus in the past couple months, at least going back to March, has been about getting the State Department damage assessment report. And that’s how we saw State Department witnesses taking the stand yesterday during the proceeding.

In addition to that, we’ve also seen, you know, they’ve litigated trying to get the dismissal of computer fraud charges and arguing that he could not have exceeded authorized access because he did in fact have clearance for his computer. We’ve had a discussion in the courtroom about getting access to an FBI law enforcement file. And so, the main focus of this proceeding has really been about forcing the discovery of evidence.

JUAN GONZÁLEZ: And the effort by his attorney to get some of the charges dismissed—what’s the difference between those that the attorneys are not trying to get dismissed at this point and those that they are?

KEVIN GOSZTOLA: Well, going back to March, throughout all of these motion hearings, they have made some attempt to dismiss charges. For the record, they did try to get all charges dismissed, because they believe that the military prosecutors and government haven’t been doing a due diligence search for information that would have to do with whether Bradley Manning is guilty or innocent, or it could be used to reduce his sentence if he is in fact convicted. And so, in this hearing in June, these charges have broken down to being espionage charges and also the two computer fraud charges. And this particular set has come up in the proceeding mainly because this is where Coombs is at as a lawyer. He’s tried to get other charges dropped, and so far the judge has not been—has not entertained these motions and sided with the defense.

AMY GOODMAN: Judge Denise Lind has ordered the U.S. government to hand over crucial documents, including the State Department’s preliminary damage assessment of Manning’s actions to the defense. Manning’s lawyers are arguing the information is vital to Manning’s defense. What is coming of this, Kevin?

KEVIN GOSZTOLA: There’s been a huge development in the last month with this assessment report, in that the defense is actually going to get this draft. Now, the government tried to, in May, argue that this draft only contains speculative information. And in court in June, the press and public heard that the judge was not going to buy this argument. That’s not a legitimate reason for the defense to not get to see the contents.

And so then what became the issue with this damage assessment report was Coombs has the document, but he wanted to know if it was the most up-to-date version of the report, because it stops on August 2011. And so, three witnesses were called yesterday. One of the witnesses, Rena Bitter, is actually the member of the operations center that oversaw the crisis response, who was in that center. She participated in that effort. And so, these people were there, and they were testifying about the contents and helping David Coombs to realize and understand exactly what was in the assessment, but this also became an effort to figure out what other records might the State Department have.

JUAN GONZÁLEZ: And Kevin, what about Manning himself, his demeanor in the courtroom? He’s rarely been seen throughout this whole several years now. Does he have any interaction with other people in the courtroom? How does he seem?

KEVIN GOSZTOLA: He doesn’t—he has very limited interaction with people who are in the audience. He’s mostly unaware of what supporters are doing, as evidenced by the fact that he became—he became aware during this proceeding that there were in fact people in the audience that had “truth” shirts, and he smiled at this, that there were people here that were supporting him. During the proceeding, he’s—sometimes he’s tuned in, sometimes he’s writing, sometimes he’s scribbling. He pays attention. There’s—sometimes when the proceeding gets very interesting, you can tell he’s engaged, he’s talking to his lawyer. And for the most part, you know, he’s behaving like somebody who was 24 years old would if they were in a military proceeding where they were largely unfamiliar with the legalese that is being discussed.

AMY GOODMAN: And Kevin, you, also Democracy Now! and other media organizations and journalists, filed a petition last month in attempt to grant the public and press access to more information about the court-martial of Manning. So far the military court has refused to make public the government’s motion papers, the court’s own orders and transcripts of the proceedings. Where is this going?

KEVIN GOSZTOLA: Judge Lind announced at the opening of the proceeding that there was this petition before the court of appeals, the Army Criminal Court of Appeals, and that she did not think that there needed to be a stay of proceedings, so there wasn’t any reason for the proceeding to be put on hold so that this could be decided.

The key issue here is that, in the proceeding, as a reporter, I don’t get to go look at these decisions, these motions, some of these orders in the aftermath. And that means that I’m listening to what is being said in real time. I’m basically trying to do my own transcript of the proceeding in order to put together reports for readers after the proceedings are concluded for the day. And this is very problematic because, in some ways, it’s hard to confirm what is being said. I know, for an example, that you have misspellings of names. You have trouble with numbers and key details. And it’s hard because you’re putting all the burden on the military briefer to provide you with information. You’re also trying to keep up with what is being read, and it just—it’s totally unreasonable that there wouldn’t be any sort of documentation provided to the press and public so that they could confirm the accuracy of the reporting.

AMY GOODMAN: Kevin Gosztola, we’re going to go to break, and then we’ll also be joined by Denver Nicks, who has written a book about Bradley Manning called Private: Bradley Manning, WikiLeaks, and the Biggest Exposure of Official Secrets in American History.