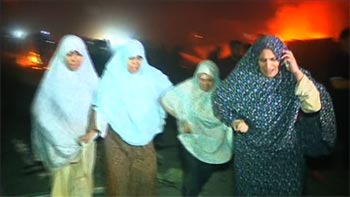 HAVANA TIMES – Israel is threatening to launch a ground invasion of the Gaza Strip after breaking an informal ceasefire with an ongoing series of deadly attacks. At least 13 Palestinian civilians have been killed, including a baby and a mother pregnant with twins, in addition to more than 100 wounded.

Israel says it has launched the strikes to prevent Palestinian rocket fire, but the latest round of violence began last week when Israeli troops killed a young boy in Gaza. The situation has escalated since Saturday, when Palestinian militants fired at an Israeli military vehicle near the Israel-Gaza border.

After Palestinian militant groups agreed to an informal truce on Monday, Israel broke two days of quiet with Wednesday’s attack. Israel’s attack on Gaza marks its largest since the U.S.-backed operation that killed more than 1,300 Palestinians nearly four years ago. We go to Gaza City to speak with Palestinian journalist Mohammed Omer.

AMY GOODMAN: Israel is threatening to launch a ground invasion of the Gaza Strip after breaking an informal ceasefire with a series of deadly attacks. On Wednesday, an Israeli air strike assassinated Ahmed Jabari, the head of Hamas’s military wing. The bombing continued throughout the day and night, killing at least 13 civilians, including a baby and a mother pregnant with twins. More than a hundred Palestinians were also wounded. The toll is expected to rise.

At least three Israelis were killed today when Palestinian rockets hit a residential building in the town of Kiryat Malachi, the first Israeli fatalities since the latest fighting began. Israel says it has launched the strikes to prevent Palestinian rocket fire, but the latest round of violence began last week when Israeli troops killed a young boy in Gaza. The situation has escalated since Saturday, when Palestinian militants fired at an Israeli military vehicle near the Israel-Gaza border. After Palestinian militant groups agreed to an informal truce Monday, Israel broke two days of quiet with Wednesday’s attack.

Israel’s attack on Gaza marks its largest since the U.S.-backed operation that killed more than 1,300 Palestinians nearly four years ago. It was just about this time, just after President Obama was elected for the first time, that the attacks, Operation Cast Lead, began.

Welcome back to Democracy Now!, Mohammed. Can you describe what’s happening now on the ground?

The situation is very critical at the moment. As I’m sitting right now with a number of people who are evacuating a number of the injured people in Gaza City, the medical crew are unable to find where to go to evacuate the dead bodies. There is a lot of people who are injured; so far, we have the number at—according to the medical crew next to me, we have 15 people who were killed in the last 24 hours, and we have over 150 people who are injured. The majority of them are men and women. In the last few hours, a—or actually, in the last couple of hours, the emergency team here and the ambulances announced that they found the bodies of four people, including a child who lost her leg and a young man who was critically wounded between the north and Gaza City.

AMY GOODMAN: Mohammed Omer, I wanted to ask you about a new report in the Israeli newspaper Ha’aretz. The Israeli peace activist Gershon Baskin, who helped mediate between Israel and Hamas in the deal to release Gilad Shalit, told the paper that Hamas military commander Ahmed Jabari was assassinated just hours after he received the draft of a permanent truce agreement with Israel, which included mechanisms for maintaining the ceasefire. What do you know about this?

MOHAMMED OMER: Well, this is accurate. This is what some of the Hamas officials are confirming. Now, I should say that the—there is outrage among the Palestinian political parties, particularly Islamic Jihad and Hamas and even PFLP and the more secular movements. They are angry because they say that al-Jabari is known as a moderate and negotiator, just to remind our people that al-Jabari is the one behind the release of the Israeli soldier Gilad Shalit. And al-Jabari was the one who’s actually the contact person during this critical time of the year; when there is bombing and F-16s firing and there is a need for truce, al-Jabari is the person to talk on behalf of the Palestinians. So far, the Egyptians will not be able to reach anybody who is able to talk to the Palestinians and to install real truce. It’s exactly like losing Yasser Arafat, who had a lot of influence on the Palestinians. And now we are losing al-Jabari, who has a lot of influence on the military wings of all the political factions, given the fact that he plays a most important role as a Palestinian leader among the Palestinian factions and in the Palestinian street.

AMY GOODMAN: Mohammed Omer, how did this latest violence get started? The Israeli government says it’s because of Hamas rocket fire out of Gaza.

MOHAMMED OMER: Well, there was a truce, actually. There was a truce. And they also made it—they also made—the Israelis made it possible for the people to believe that there was a truce. Otherwise, someone like al-Jabari would not be moving in Gaza City. That’s out of the question. Most of the Hamas leaders, when there is no truce, they won’t be moving. He was driving with his driver or with his bodyguard, Muhammad al-Hums, in the streets of Gaza City. And I happened to be next to this bomb. There was absolutely quietness. There was no need for worry for anybody in Gaza. It was about two days ago where they were installing truce, and al-Jabari was involved in this. It was just a sudden attack by the Israeli F-16 missiles, which hit al-Jabari and caused all this riot and the retaliation, which is coming from both Hamas and other factions who are firing rockets.

As we are speaking right now, I’m just getting more breaking news from the medical team next to me, that the Israeli warships are firing missiles at the houses of the people. Yes, they are firing missiles at the houses of people in Rafah and in Khan Yunis. And the ambulance crew are not—they don’t know really at the moment where to go in order to evacuate the bodies of the people. It’s exactly like the situation yesterday. What I could confirm, that most of the casualties and the people who are injured and killed are civilians, are people who are not taking part in any type of military confrontation. Israel is indeed attacking people who are inside their homes. We have seen a lot of the families who are trying to flee the borderline area to go to the middle of the Gaza Strip, but in the middle of the Gaza Strip is being bombed by F-16s. Those who are fleeing from the—close to the beach because they fear that the warships are going to fire at them, they are faced also with F-16s firing at them in the middle of the Gaza Strip. The same with the people who are living on the east of Gaza City and the southern part of the Gaza Strip, who are facing constant gunfire caused by Israeli tanks on the border.

AMY GOODMAN: Mohammed, you actually are from Rafah, is that right? You were there earlier today?

AMY GOODMAN: Earlier today, Egyptian President Mohamed Morsi condemned Israeli air strikes on the Gaza Strip as unacceptable. This is what he said.

PRESIDENT MOHAMED MORSI: [translated] I spoke just before dawn today with U.S. President Obama, and we spoke about the necessity of ending this aggression and making sure it is not repeated. Peace and security in the region is the right of all, without aggression and this type of bloodshed. During our conversation, we examined the ways in which we could calm the situation and end these actions and this aggression of bloodshed, and how peace and security could be achieved, and how the region could be stabilized without problems in the future. I explained Egypt’s stance about our eagerness to maintain good relations with the United States and the world. But at the same time, we completely rejected this aggression and refused to accept these actions and bloodshed and the siege placed on the Palestinians and aid to them.

AMY GOODMAN: Egyptian President Mohamed Morsi spoke on Egyptian television, Mohamed Morsi apparently pulling out the Egyptian ambassador to Israel. Mohammed Omer, where do you see this all going right now? I mean—and also talk about four years ago. It was about, what, a month from now four years ago, right after President Obama was elected for the first time, before he was inaugurated, that Operation Cast Lead happened, that killed more than a thousand Palestinians. What do you see happening now?

MOHAMMED OMER: Well, it brings back the minds of many Gazans to the Cast Lead war on Gaza, actually. Many people, when they think of this, they think, “Oh, this is Cast Lead two,” because you can see it in the streets. If you go walk on the streets of the Gaza City or anywhere, people are rushing into the shops buying food and stocks. The gas stations are, if not running on near empty, they are very crowded with people trying to get as much fuel to run their electricity generators. As we speak right now, I don’t have electricity at the moment, so we have to rely on an electricty generator in order to work.

Way I see the situation, I see it’s going to [inaudible]. I see it’s not going to be solved any time soon. I think now the Egyptians will have to find another Palestinian, instead of Jabari, who was assassinated yesterday, who they can talk to. I really don’t see that the Egyptians will be able to succeed to contact anyone from the Hamas leaders, given the fact even journalists who are in Gaza City cannot reach the Hamas leaders because they are all underground and they are not reachable by their phones. And there is no way to deliver the message about any type of cease or ceasefire or truce, because the number of people who are trying to reach the Hamas officials for comment, including some Europeans who are trying to understand what—where to go after al-Jabari assassination, nobody knows where to go after al-Jabari assassination. I’m afraid this wave of violence is going to continue for a number of days. Israel has indicated on a number of occasions that they are going to ask their schools to be shut for a number of days and even weeks. That also makes many Gazans think that indeed there is a very acute and dangerous situation where the Palestinians are concerned that this is going to take a longer period.

AMY GOODMAN: Mohammed Omer, I want to thank you very much for being with us. We will of course continue to follow this developing situation. Palestinian journalist, speaking to us from Gaza City, in 2008 Mohammed won the Martha Gellhorn Prize for Journalism in Britain.