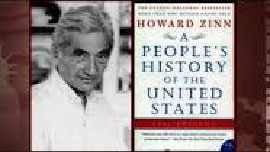 HAVANA TIMES – Newly disclosed emails obtained by the Associated Press show former Indiana Governor Mitch Daniels sought to remove Howard Zinn’s work from state classrooms just weeks after the historian’s death in 2010. Zinn’s many books include the classic, “A People’s History of the United States,” which sold more than a million copies and is still used in high schools and colleges across the country.

In an email exchange with top Indiana education officials, Daniels wrote, “This terrible anti-American academic has finally passed away.”

After he described “A People’s History” as a “truly execrable, anti-factual piece of disinformation that misstates American history on every page,” Daniels asked: “Can someone assure me that it is not in use anywhere in Indiana? If it is, how do we get rid of it before more young people are force-fed a totally false version of our history?”

Daniels’ comments have sparked outrage within the academic world in part because he recently became the president of Purdue University in Indiana. We’re joined by two guests: Anthony Arnove, the co-editor with Zinn of “Voices of a People’s History of the United States,” a critically acclaimed primary-source companion to Zinn’s best-seller; and Dr. Cornel West, professor at Union Theological Seminary.

AMY GOODMAN: We turn now to a battle over the work of the late historian Howard Zinn, author of many books, including his classic, A People’s History of the United States. The book sold over a million copies, is still used in high schools and colleges across the country.

Howard Zinn died at the age of 87 on January 27, 2010. Less than two weeks after Zinn’s death, then-Indiana Governor Mitch Daniels sought the removal of Zinn’s work from the schools of Indiana. The revelation was made last week by the Associated Press after it obtained Daniels’ emails through a public records request.

In an email exchange with top Indiana education officials, Daniels wrote, quote, “This terrible anti-American academic has finally passed away.” After he described A People’s History of the United States as a, quote, “truly execrable, anti-factual piece of disinformation that misstates American history on every page,” Governor Daniels asked, quote, “Can someone assure me that it is not in use anywhere in Indiana? If it is, how do we get rid of it before more young people are force-fed a totally false version of our history?’’ Daniels asked.

Governor Daniels’ comments have sparked outrage within the academic world, in part because he recently became the president of Purdue University, the second largest school in Indiana. On Friday, the American Historical Association issued a statement saying it, quote, “deplores the spirit and intent” of Daniels’ emails. The association wrote, quote, “Attempts to single out particular texts for suppression from a school or university curriculum have no place in a democratic society.”

Former Governor Mitch Daniels, now head of Purdue, has defended his actions. In an email to the Associated Press, he wrote, quote, “We must not falsely teach American history in our schools. We have a law requiring state textbook oversight to guard against frauds like Zinn, and it was encouraging to find that no Hoosier school district had inflicted his book on its students,” he wrote.

Well, to talk more about this, we’re joined by Anthony Arnove. He is the editor, with Howard Zinn, of Voices of a People’s History of the United States, a critically acclaimed primary-source companion to Zinn’s best-selling A People’s History of the United States. His most recent book is Howard Zinn Speaks: Collected Speeches 1963 to 2009. Anthony Arnove attended public school in Indiana from ’72 to 1987. His family lives in Bloomington, Indiana, where Anthony was raised.

We welcome you both to Democracy Now! So, Anthony, this email trail, did it surprise you when AP released it?

ANTHONY ARNOVE: It didn’t surprise me at all. I mean, if you look at what Mitch Daniels has done in Indiana, it’s been a consistent attack on teachers, consistent attack on unions. He really laid the basis for the model that Scott Walker has been trying to implement in Wisconsin, with an early executive order eliminating collective bargaining rights for union workers in the state, making Indiana the 23rd—I hate to use the expression of a right-to-work state; it’s really a right to disenfranchise workers, rather than a right to work—but making Indiana the 23rd so-called right-to-work state, and consistently going after schools of education. There’s a national attack, which Daniels is part of, to say that schools of education are polluting the minds of teacher educators. And right after he sent that email that you quoted, he went after a teacher training program that was taking place at Indiana University in Bloomington in July of 2010. And he claims, “Oh, I was only talking about the teaching of K-through-12 students. I didn’t—I want to protect K-through-12 students.” He was actually going after a program that was about teacher training, in which people were reading Howard Zinn as part of understanding how to open up students to different perspectives on American history.

AMY GOODMAN: I want to go to Howard Zinn on Democracy Now! We spoke to him in May of 2009—we spoke to him a lot, but in May of 2009—this is the clip—when he was in New York to launch a new edition of A Young People’s History of the United States. And I asked him to respond to a question he had frequently been asked about the book: Is it right to be so critical of the government’s policies, of the traditional heroes of this country?

HOWARD ZINN: It’s true that people have asked that question again and again. You know, should we tell kids that Columbus, whom they have been told was a great hero, that Columbus mutilated Indians and kidnapped them and killed them in pursuit of gold? Should we tell people that Theodore Roosevelt, who is held up as one of our great presidents, was really a warmonger who loved military exploits and who congratulated an American general who committed a massacre in the Philippines? Should we tell young people that?

AMY GOODMAN: The late historian Howard Zinn. Anthony Arnove, where does this go from here? Because Governor Mitch Daniels is now the president of Purdue University.

ANTHONY ARNOVE: Yeah, and, in fact, just a couple days ago, the board of trustees at Purdue gave him a $58,000 pay bonus after only six months in office. Yes.

ANTHONY ARNOVE: On top of his $410,000 salary. So he’s being backed up by the board, which he, as governor, had helped put in by appointing them as trustees. There’s now been a pushback. Faculty at Purdue University are organizing. A number of teachers’ unions and National Education Associations are putting pressure on Daniels. But he is very much asserting—you know, holding to his position and escalating his rhetoric around Howard’s work. So I think this really is going to continue to be a fight.

AMY GOODMAN: And is it limited to Howard Zinn?

ANTHONY ARNOVE: Well, it’s not limited to Howard Zinn. In fact, there’s a broader attack on critical education studies. James Loewen has written a piece in which he pointed out that when he wrote a book about “sundown towns” and highlighted the case of Greensburg, Indiana, which is where Honda built a non-union auto factory recently in the state of Indiana with a huge subsidy organized by Mitch Daniels, that he was supposed to give three talks organized by the Indiana Civil Rights Commission. Those talks were canceled under pressure by Governor Daniels’ office. So, it’s a very politicized situation. And they’re aware that there’s a certain kind of history which is dangerous to people like Mitch Daniels. If you teach a history that is about the history of social movements, about the history of people challenging those in power, about the importance of unions, about the importance of civil rights struggles, that threatens the agenda of Mitch Daniels as governor, as president of the university, and as someone with national political aspirations.

AMY GOODMAN: Professor Cornel West, we just have 30 seconds. Your response? You knew Howard Zinn well. You, too, are a professor who writes many critical books, critical of U.S. policy, domestic and foreign.

CORNEL WEST: Well, I want to salute the work of my dear brother here, and I was blessed to write the introduction to Howard Zinn’s writings on race. But the important thing to keep in mind is that it’s a compliment to Howard Zinn, because it shows the power of his work. And it’s Howard Zinn today; it’s Ira Katznelson, Eric Foner, David Brion Davis, Barbara Fields, Robin Kelley tomorrow. It’s part of a larger discourse that says, “Let’s tell the truth about the American past and present, and let’s do it in such a way that it relates to everyday people, especially the young people coming along.” And, oh, we’ve got a lot of hope among the young folk. They’re tired of all this hypocrisy, mendacity and criminality.

AMY GOODMAN: Well, we’re going to have to leave it there. I want to thank Professor Cornel West and Anthony Arnove, editor and collaborator with Howard Zinn.