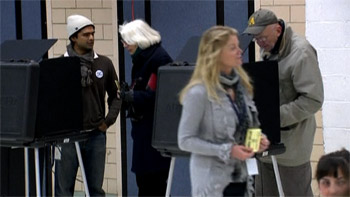 In a historic move, voters in Colorado and Washington have legalized marijuana for recreational use, becoming the first states to do so. In California, voters defeated a ballot measure to repeal the death penalty and another that would have required labeling of genetically modified foods.

AMY GOODMAN: It is the morning after. Well, while much attention was fixed on the presidential race, Tuesday’s election also saw voters decide on a series of landmark ballot initiatives at the state level.

Maryland voters also affirmed the DREAM Act, allowing undocumented immigrants to receive in-state tuition, while Minnesotans rejected a constitutional amendment that would have required a photo ID to vote. In Montana, voters overwhelmingly approved a measure that would limit corporate spending on elections, while Colorado voters also resoundingly approved a measure backing a constitutional amendment that would call for the same.

In a historic move, voters in Colorado and Washington state have legalized marijuana for recreational use, becoming the first states to do so.

In California, voters defeated a ballot measure to repeal the death penalty and another that would have required labeling of genetically modified foods. A separate measure to ease penalties for nonviolent offenses under California’s three-strikes law was approved. California voters also rejected a measure that would have curbed the political influence of unions.

To learn more about these votes and the ballot initiative process, we’re joined now by Justine Sarver, executive director of the Ballot Initiative Strategy Center, who’s in Washington, D.C.

Justine, welcome to Democracy Now! We also have Laura Flanders and Ben Jealous, CEO and president of the NAACP, with us. Justine, lay out the significance of these initiatives around the country, what we know and what we don’t know yet.

JUSTINE SARVER: Thank you. Good morning, and thanks for having me.

Well, you gave a great summary. I think that the best thing about last night was we’re seeing what we’ve known all along, is that this country is changing, and voters made great decisions last night. What a historic evening for the right for all loving couples to marry. This is an amazing, amazing victory in the movement for the freedom to marry. But at the same time, to be able to say that we ended a two-year period with voters rejecting those voter restriction laws that we’ve seen across the country, we couldn’t be more thrilled.

JUSTINE SARVER: One thing that I think—go ahead.

JUSTINE SARVER: Oh, I was just going to bring up the rejection of the restrictions on women’s health in Florida. You know, last year, we saw Mississippi reject a personhood amendment. And in Florida this year, again, people voted for—to protect women’s health.

BENJAMIN JEALOUS: Well, actually, no, we took a national position. We had fought in state after state for marriage equality. We fought on the right side in California. We turned it around. We sued the state with a bunch of other groups trying to invalidate it. There was only one state in the Midwest where we had ever taken, if you will, a side contrary to where we are now.

What happened, for us, is, look, we saw what happened in North Carolina late last spring, where they actually encoded discrimination into their state constitution. And we said it’s time for us to stop doing this state by state; we have to deal with it nationally. We’ve got to deal with it head on, because we’ve got two things at stake. We have the issue of marriage equality itself, but we also have a 100-year tradition in this country of using constitutions to expand rights, to eviscerate discrimination. And we are invested in both. And so, we stood up. We dug down deep.

And frankly, we were way out there in Maryland when a lot of national groups were willing to write off that race. And we said, “No. You know, look, we can do this. We’ve moved the black community 15, 20 percent just in two weeks, between President Obama coming out and then us coming out, and we can actually get this done.” And we saw groups like the Human Rights Campaign really say, “You know what? We’re going to take real risks here.” And we saw other groups like Freedom to Marry come on board. We saw the National Gay and Lesbian Task Force come on board. But, you know, Chad Griffin really came in brand new to HRC and decided to take a big risk on a state that the rest—

BENJAMIN JEALOUS: Yeah—that the rest of the movement was really flirting with writing off. And this is a great moment for visionary, courageous movement leadership.

LAURA FLANDERS: You talked about the historic nature of the two votes on the war on drugs and marijuana. Absolutely historic. But these votes in Maryland, Maine and Washington on marriage equality were also historic, the first time ever you had voters affirmatively approve equality. And again, this is an up-from-below victory. Ten years ago, 15 years ago, 20 years ago, nobody would have thought marriage equality was a winning victory—a winning issue. And in fact, leaders in this country, political leaders, even movement leaders, ran a mile. This is an issue that’s been pushed by grassroots folks, driven by their loved, by their families. I just have to say, I’m very excited about the freedom to marry. We also need to retain our freedom not to marry and to not have our identity as persons—

BENJAMIN JEALOUS: You know, and folks have won the right—

LAURA FLANDERS: —our health insurance contingent on our marital status.

BENJAMIN JEALOUS: And folks have won the right for gay divorce now, right? But also, this should be a model for all movements—

BENJAMIN JEALOUS: —all of them have worked together to win victories now, run the tables in a way people thought wasn’t possible. I mean, Minnesota, its politics are interesting. And when it comes to issues of inclusion, the racial disparities there are so deep you would say that it’s Mississippi with snow. So the fact that they actually defended marriage equality there, too, is profound.

AMY GOODMAN: But, Ben Jealous, you lost the death penalty initiative in California, which a lot of people had organized around.

BENJAMIN JEALOUS: But we also saw that we could come much closer.

AMY GOODMAN: Which was to turn—overturn the death penalty in California.

BENJAMIN JEALOUS: Right, that’s right. And we also saw that we came much closer than many thought was possible. And I think this really raises a question, quite frankly, for the Catholic church in this country, about whether or not, when it comes to the doctrine of life, are they willing to go as far in ending the death penalty as they are in trying to end abortion? Because if they’re willing to really dive in on the issue of the death penalty, then we could actually get rid of this much quicker. And that’s sort of the silent thing that wasn’t talked about in California, is that the Catholic church held back a lot more than they should have. And we hope that they will now take a hard look at their responsibility to help this country get beyond a punishment that every pope has abhorred.

One important victory last night I think we haven’t talked about is in Minnesota, where we actually defeated strict photo ID on the ballot. And that’s very important, because it sends a signal to those folks who are investing a lot of money in vote suppression, that maybe they should start investing their money in not—trying to get along with people, rather than trying to take their votes away.

AMY GOODMAN: Justine Sarver, talk about the amount of money that was poured into ballot initiatives around the country, like in defeating the GMO ballot initiative, a proposition in California, to label genetically modified foods.

JUSTINE SARVER: This was a very expensive election. Just like candidate elections, we’re seeing really, really huge amounts going into ballot measures. And so, once all of the spending is tallied across the country, we may see upwards of a billion dollars having been spent on ballot measures, and in California, $350 million alone. So, we have seen a lot of corporate influence rising, rising their spending amounts in ballot measure campaigns and really trying to legislate and buy—buy policy on the ballot. Luckily, in many cases, voters are—have been smart enough not to take the ads, the television ad barrages they’ve seen, and make up their own minds.

AMY GOODMAN: I want end on the question of progressive politics. I mean, President Obama, first African-American president elected in history, now re-elected in history, in a land with a legacy of slavery. But you also have President Obama presiding over the longest war in U.S. history in Afghanistan, escalating the drone war, presiding over more deportations of immigrants than any president in history, not closing Guantánamo, among other issues. Where do you plan to work in these next four years? What does this mean to you, and the fact that Green Party and other third-party candidates were so locked out of any kind of mainstream discourse?

LAURA FLANDERS: There is simply no way for this nation to address its economic crisis without addressing its global role and its sort of imperial reach internationally. We have got to continue the message of the international peace movements of this country that domestic and foreign policy issues not be divorced. They’re connected, they’re related. The people have to be in the streets around the question of our economic crisis here, but it has to be connected to a shift in our international agenda and a shift in our civil liberties agenda. We need to talk about these voting rights issues, that the administration is going to be so proud of having overcome, as civil liberties issues, as constitutional rights issues, no different from the right to dissent and the right to blow the whistle.

AMY GOODMAN: But, Ben Jealous, will the movements that elected President Obama take him on?

AMY GOODMAN: Did they take him on in the last—in his first term?

BENJAMIN JEALOUS: Well, look, you’re going to see folks come together. Two years and one month ago, we pulled together a march in Washington called One Nation, where we actually pulled together people from across the left, even some folks from the center in this country, got them to one table—the machinists and the environmentalists, you know, and in a wide range of sort of pairings like that—and said, “We’re going to work together for jobs. We’re going to work together for justice. We’re going to work together for basic rights.” And you’ve seen the leadership of many of those organizations keep on strategizing. That’s what makes this whole marriage equality fight we were talking about earlier possible. That’s what made it possible for us to bring 70,000 people to Mayor Bloomberg’s house against racial profiling, with 35 gay and lesbian groups, and 55 more thousand people than we thought were actually going to show up. And so, we will stay in movement mode. We will be more confrontational, because right now—

AMY GOODMAN: We will leave it there.

BENJAMIN JEALOUS: We have a lot to get done.

AMY GOODMAN: Ben Jealous of the NAACP and journalist Laura Flanders, Justine Sarver at Ballot Initiative Strategy Center. That does it for the show.

(*) See this show on Democracy Now.