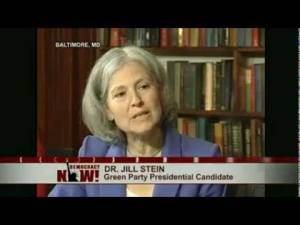 HAVANA TIMES — As the corporate media covers every move made by Republican presidential contender Mitt Romney and Democratic incumbent Barack Obama, we go to Baltimore to cover the Green Party 2012 National Convention.

“We need big solutions, you know, not solutions around the margins. We really need to end unemployment. We need to put 25 million people back to work with good-paying jobs,” says presumptive presidential nominee Dr. Jill Stein, who is running on a platform called “the Green New Deal” that emphasizes economic justice, tough financial regulation, the repeal of Citizens United and a transition to a “green economy.”

The Green Party expects to be on the 2012 ballot in at least 45 states and plans to spend approximately $1 million on its campaign. Stein is the party’s first candidate to independently qualify for federal matching funds, a milestone for this 11-year-old third party.

AMY GOODMAN: We’re broadcasting from Baltimore, where the Green Party convention is underway. As the media covers every move made by Republican presidential contender Mitt Romney and Democratic incumbent Barack Obama, we speak with a presidential candidate who has received far less attention. Her name is Dr. Jill Stein. She’s the presumptive nominee of the Green Party ticket, a party that’s not included in presidential debates and rarely interviewed on policy issues.

On Wednesday, at an event at the National Press Club in Washington, D.C., Dr. Stein announced her vice-presidential choice, Cheri Honkala. Cheri Honkala is a single mother who has firsthand experience with homelessness. In 2011, she ran as a Green for sheriff of Philadelphia on a platform of ending foreclosures and halting evictions. Stein applauded Honkala’s record as an anti-poverty advocate.

DR. JILL STEIN: Our campaign is here to change that breaking point into a tipping point, to begin taking back the promise of our democracy and the peaceful, just, green future that we deserve and that is within our reach. So, with that, I’m very honored to introduce my running mate, who is one of the nation’s leading anti-poverty advocates. She is the national coordinator for the Poor People’s Economic Human Rights Campaign, which is one of the largest multiracial, multigenerational movements actually led by the disenfranchised.

CHERI HONKALA: My name is Cheri Honkala, and I am thrilled to be running on the ticket for vice president of the United States of America with Jill Stein.

AMY GOODMAN: That was Green Party presidential candidate Dr. Jill Stein and her vice-presidential choice, Cheri Honkala. Another high-profile contender for Stein’s running mate, actress and comedian Roseanne Barr, was also running for the nomination of president. Jill Stein and Cheri Honkala now have three-quarters of the delegates at the convention in the current tally. They’re running on a platform called “the Green New Deal.” It emphasizes economic justice, tough financial regulation, the repeal of Citizens United, and a transition to a “green economy.”

This year, the Green Party expects to be on the ballot in at least 45 states and to spend about a million dollars on its campaign. Stein is the party’s first candidate to have independently qualified for federal matching funds, a milestone for this 11-year-old alternative party. It could be a major boost for a campaign that does not accept corporate donations.

We welcome you both to Democracy Now!

DR. JILL STEIN: Thanks, Amy. It’s great to be here.

CHERI HONKALA: Happy to be here.

AMY GOODMAN: It’s good to have you with us. Dr. Stein, how—right now, the actual nomination has not taken place. We interviewed Roseanne Barr a while ago, who was running against you for Green Party president. But if you were elected president, what would you do?

DR. JILL STEIN: Clearly, a lot needs to be done, Amy, as you know so well. The American people are really in crisis, facing the loss of our jobs, decent wages, affordable healthcare, losing our homes. We have a generation of students who have become indentured servants that can’t repay their debt because of the high unemployment. Attacks on our civil liberties. The climate is in serious jeopardy. So, we need big solutions, you know, not solutions around the margins. We really need to end unemployment. We need to put 25 million people back to work with good-paying jobs.

AMY GOODMAN: How would you do that?

DR. JILL STEIN: Through a Green New Deal, and it’s modeled on the New Deal that helped get us out of the Great Depression. Instead of using the money that went into the stimulus package, for example, of 2009, some $700 billion, a little more—and you know that more than half of that went to basically corporate subsidies and tax breaks, which don’t create jobs—if, instead, the money were simply used for direct job creation, jobs that are community-based in small businesses and worker cooperatives, as well as public services and public works, that’s how you can do it. It’s not rocket science. We’ve actually done it before, and it actually works.

So, the money would be basically distributed to communities to create the kinds of jobs that they need to become sustainable, not only economically, but also socially and ecologically, as well. So we’re talking about jobs in the green economy—clean manufacturing; local, organic agriculture; public transportation; clean, renewable energy—jobs in which we can put people to work right now in the places that they need them. And at the same time, that makes wars for oil obsolete, because then we have a green energy economy, and it also—it basically puts an end to the climate crisis, which we’re seeing unfolding.

And just one other point, which is that we also create the social jobs that our communities need. So let’s put 300,000 teachers back to work, the nurses, the day care after school, affordable housing construction, violence and drug abuse prevention and rehabilitation. It creates a whole spectrum of jobs, and we can jumpstart this program basically at the cost of the first stimulus package. But instead of creating a small dent in the problem, we can really fix it and put an end to unemployment in this country.

AMY GOODMAN: You are Dr. Jill Stein, so let’s talk about healthcare. As Romney continues to vow to end so-called “Obamacare,” the Republican-controlled House passed a repeal of the measure, but the Democrats in the Senate say they will not allow this to pass there. Speaking on the House floor, House Majority Leader—House Majority Leader Eric Cantor and Democratic Minority Leader Nancy Pelosi traded barbs over the law.

REP. ERIC CANTOR: We are trying to end the era of Washington-controlled healthcare. We believe, as do most of the American people, that it’s patient-centered care is our goal. That’s where we need to start. We start along the path towards that goal by repealing Obamacare.

REP. NANCY PELOSI: American people want us to create jobs. That’s what we should be using this time on the floor for, not on this useless bill to nowhere—bill to nowhere, that does serious damage to the health and economic well-being of America’s families.

AMY GOODMAN: That’s Nancy Pelosi and Eric Cantor trading barbs on the House floor. Dr. Jill Stein, interestingly, you are from Massachusetts, from Lexington, so even as Mitt Romney attacks President Obama over his healthcare plan, it was very much modeled on Romney’s healthcare plan when he was governor of your state of Massachusetts.

DR. JILL STEIN: Exactly, yes, and we’ve had Romneycare, aka Obamacare, in effect in Massachusetts for five years. So, there’s a track record here. And, you know, that track record is very problematic. Romneycare, Obamacare, helped some people, and it hurt other people. It basically pits the very poor against the near poor. And that’s not a solution.

And this whole debate, I think, misses the point, which is that we can actually solve this problem. There is also a track record of success: it’s called Medicare. Instead of spending 30 percent of our healthcare dollar on waste and wasteful insurance bureaucracy and paper pushing, we can take that 30 percent, squeeze it down to 3 percent—that’s what the overhead is in Medicare—and then use that incredible windfall to actually expand healthcare and cover everyone. So, you know, Medicare works. People like it. It’s been tampered with, and we need to fix it and create an improved Medicare, but it actually works, and we have the track record all over the world, really, of just about every developed nation.

AMY GOODMAN: So, just dropping the “over 65” from Medicare?

DR. JILL STEIN: Exactly, right. Let’s make it from the point of conception on, you know, that we’re basically covered cradle to grave. And—

AMY GOODMAN: How could the U.S. afford that?

DR. JILL STEIN: Well, it actually is a money saver. And we know that because of that 30 percent waste, that is part and parcel for our privatized healthcare system now, 30 percent of your healthcare dollar is paying for those elaborate forms that you have to fill out, you know, every time your insurance changes or every time you see a provider. There’s a mountain of minutiae that goes into the tracking of payments. Instead of tracking who’s using what and who pays for it, let’s just pay for healthcare, and let’s cover it as a human right.

There are—most other developed nations around the world are using a Medicare-for-all, single-payer-type system, providing better care with better outcomes at half the cost of what we’re paying. So, there’s a really good solution here. It also stabilizes medical inflation, which is actually the biggest driver of our skyrocketing healthcare costs. And on that account, economists estimate that moving to a Medicare-for-all system will actually save us trillions of dollars over the coming decades. So this is not a cost, this is actually a money saver.

AMY GOODMAN: The issue of the Supreme Court upholding Obama’s healthcare law, but not on the issue of expansion of Medicaid.

AMY GOODMAN: Explain the significance of this.

DR. JILL STEIN: Well, that’s huge. It basically destroys what was most valuable in the Affordable Care Act. And, in fact, if you look at Massachusetts, what has really benefited people in Massachusetts who need healthcare is the expansion of Medicaid, far and above anything that the Romneycare or Obama—

AMY GOODMAN: What does that mean, the expansion of Medicaid? And what won’t happen now?

DR. JILL STEIN: It means—exactly, it means that people who are basically at the poverty level or some slight increase over the poverty level—I’m not sure exactly where the cutoff is—but it means if you’re poor, you’re covered under Medicaid, with Medicaid expanding to cover millions of people who are not currently eligible. So, Romneycare expanded Medicaid eligibility.

AMY GOODMAN: And what is the Supreme Court decision?

DR. JILL STEIN: And the Supreme Court decision, basically it allows states to take it or leave it on the Medicaid expansion. So it’s expected—there were some, you know, 20-some states, a majority of states, actually, who were suing to overturn the Affordable Care Act, so it’s expected that those states are going to decline the expansion of Medicaid.

AMY GOODMAN: We’re going to break and then come back to this discussion, and you can introduce us to your new vice-presidential running mate. Again, the official vote of the Green Party has not taken place yet for the Green Party candidate, but Dr. Jill Stein is the Green Party presumptive nominee. She was running against Roseanne Barr.