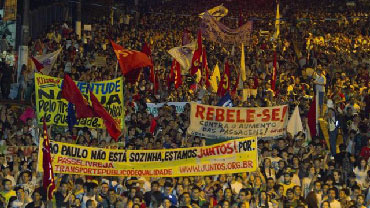 HAVANA TIMES – Brazil is witnessing some of its largest protests in decades, after some 240,000 people protested Monday. Tens of thousands continue to take the streets. The demonstrations were initially sparked by an increase in bus fares in São Paulo, but the uprising soon spiraled nationwide amid outrage over government corruption, inequality, failing public services and police brutality against demonstrators.

Protesters have also condemned the high level of government spending on the 2014 World Cup and the 2016 Summer Olympics. We’re joined from São Paulo by Lucia Nader, executive director of the Brazil-based human rights organization Conectas and a participant in the protests.

NERMEEN SHAIKH: We turn now to Brazil, which is witnessing some of its largest protests in decades. On Monday, more than 240,000 protesters took to the streets across Brazil. Another 50,000 rallied last night in São Paulo, Brazil’s largest city. In response, the Brazilian government is deploying the National Public Security Force to five major cities.

The protests were initially sparked by an increase in bus fares in São Paulo, but the uprising soon spiraled nationwide amid outrage over government corruption, inequality, failing public services and police brutality against demonstrators. Protesters have also condemned the high level of government spending on the 2014 World Cup and the 2016 Summer Olympics.

This is José de Freitas, an 80-year-old protester in São Paulo.

JOSÉ DE FREITAS: [translated] We took a long time to wake up. What we have here is a fake democracy. It isn’t democracy. We fought against the political dictatorship, and now we’re fighting against a monopolistic dictatorship.

AMY GOODMAN: Well, to talk more about the protests, we’re joined now via Democracy Now! video stream by Lucia Nader in São Paulo, executive director of Conectas, a Brazil-based human rights group. She has been participating in the protests there.

We welcome you to Democracy Now!, Lucia. How did these protests begin? What sparked them? And what are you demanding?

So the protests started, as you said, as a claim not to increase the bus fare in São Paulo. And what happened was that here, in the city of São Paulo, we had two protests, last Tuesday and last Thursday, that were quite small and focusing on the bus fare issue in the city. But on Thursday, there was a huge repression by the police using a lot of violence. Some staff from Conectas were there. Some people from Conectas were there and saw and suffered with the violence. And after this violence and after the big repression from the police, all the country started to claim for other specific demands—some of them against this police violence, some of them against corruption, several of them still focusing on the bus fare, other people asking for political reform, other questioning the expenditures with the World Cup and what is being spent with education and health, in a comparison, and things like this. So, today what we live in Brazil is a widespread national protest with very different claims, somehow—sometimes contradictory, one to each other.

NERMEEN SHAIKH: Lucia, could you also explain how the government has so far responded to the protests?

But to answer your question, what happened is that, at the beginning, all the—all the three levels of the government were quite quiet about it or somehow supporting the violence by the police on Thursday and giving some mixed messages of in what side they were. Yesterday, President Rousseff came to the TV and doing an opening of an event and spoke for five minutes about the situation, saying that she’s hearing what is coming from the street and her government is trying to answer to that.

AMY GOODMAN: Lucia, we have the comments of President Rousseff, which she made on Tuesday, explaining the roots of the protest.

AMY GOODMAN: That’s Brazil’s president, Rousseff. Lucia, if you could respond to her and, in this final comment, say where this protest, you believe, is headed?

LUCIA NADER: It’s difficult to say where the protest is heading. Today the country is focusing on several claims. This morning, some protests started in other parts of the city, that not the rich neighborhood, as it was up to now. But I believe that it’s healthy, anyway, that the population is on the street, but somehow we fear also that the discussion is being—is taking a path that can weaken the democratic institutions and the several achievements that Brazil had in the last decade.

AMY GOODMAN: Lucia Nader, we want to thank you for being with us, executive director of Conectas, a Brazil-based human rights group. She’s been participating in the protests, speaking to us from São Paulo via Democracy Now! audio stream.