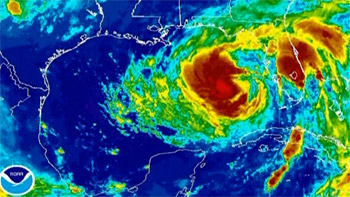 HAVANA TIMES — Tropical Storm Isaac is heading through the Gulf of Mexico, threatening to batter the Gulf Coast. Federal officials expect the storm to develop into a Category 1 hurricane and make landfall on Wednesday.

The storm will mark the most serious test of New Orleans’ rebuilt levees in the seven years since Hurricane Katrina. We go to New Orleans to speak with Washington Post reporter Manuel Roig-Franzia.

AMY GOODMAN: Well, Manuel Roig-Franzia, you are speaking to us now from New Orleans, not exactly where you expected to be.

AMY GOODMAN: But we’re very glad we could get you into a studio. Another TV studio had already given the workers off. Many people are evacuating. Talk about the situation right now in New Orleans, with Hurricane Isaac expected to make landfall sometime in the morning tomorrow.

MANUEL ROIG-FRANZIA: It’s such a strange situation. I was here seven years ago this week, when Hurricane Katrina came ripping through here and changed America’s perception of how we handle disasters and really altered the landscape of this city. Here we are seven years later, and there’s another storm coming towards this area. It doesn’t appear to be as big and as strong as Hurricane Katrina, but it’s interesting what’s happening to it this morning. It has slowed down considerably. It’s only moving seven miles per hour. And the significance of that is that when it’s over those warm waters of the Gulf, it gains strength. And if it stays moving at this slow pace once it reaches land, then it’s much more likely to dump a lot of rain on these parts of Louisiana that are essentially bowls, that flood when there’s just a regular little rainstorm. And so, that’s the big concern that people have here, not just in New Orleans, but in the even lower-lying areas outside of the city, that people are not taking the storm seriously enough, that there could be flooding issues. And there’s certainly a heightened level of anxiety among the first responders and the government officials, who are anticipating the potential for up to 20 inches of rain in some places.

AMY GOODMAN: Manuel Roig-Franzia, you’ve been covering the city for a long time. You arrived the day after the levees broke seven years ago. How has the demographics of the population of New Orleans changed?

MANUEL ROIG-FRANZIA: Yeah, New Orleans is a smaller city than it was then. There was a diaspora of African Americans from this city. I was down in the Lower Ninth Ward. I’m sure everybody remembers that. It’s etched in our memories from Katrina. I was down there just yesterday to sort of revisit it. And I was amazed to see that it was like a ghost town. There were still houses that were sagging beneath broken roofs, and there were empty lots where someone may be hoping to rebuild their house. And then you’d walk a few more steps, and there would be someone sitting on a porch in this semi-wasteland. This city has been marked forever by this storm. But it’s interesting. Last night, I met up with some old friends and met some—made some new friends. And one of the things they remarked about is that they thought there was also this binding effect that Hurricane Katrina had, that a lot of people who didn’t know each other got to know each other then. And if you were looking for some kind of a silver lining, this sort of knitting of the community certainly seems to have taken effect.

AMY GOODMAN: Manuel, before we leave you, the levees—talk about the change in the last seven years and what you possibly face tomorrow.

MANUEL ROIG-FRANZIA: Yeah. American taxpayers poured a ton of money into this area after Katrina. The levees were really exposed during that storm as being flawed and needing to be either repaired or improved.

AMY GOODMAN: You have 10 seconds before the feed dies.

MANUEL ROIG-FRANZIA: OK. Well, $10 billion was spent here, and they are very confident that the levees are much better than they were then.

AMY GOODMAN: Manuel Roig-Franzia, thank you so much for being with us, author of The Rise of Marco Rubio, also a reporter for the Washington Post, is actually in New Orleans right now to cover Hurricane Isaac. We wish you and the whole community of New Orleans and Louisiana, the Gulf Coast, the very best.