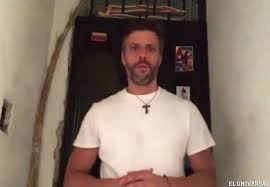 The sentence indicates that Lopez is to serve his sentence at the Ramo Verde military prison located in the neighboring city of Los Teques, where he has been imprisoned for the last year and a half.

The ruling was handed down by judge Susana Barrieros after several hours of deliberation. Lopez offered a two-hour defense statement during his hearing but was unable to present a video with which he hoped to clarify his position.

Voluntad Popular reported that Lopez will inform the country of his coming activities through his wife, Lilian Tintori.

The final hearing was witness to a confrontation outside the courthouse, where a group of government supporters attacked sympathizers who called for Lopez’ release with stones, sticks and fists.

A Voluntad Popular activist who was beaten during the brawl died as a result of a heart attack. Party leaders blame the government for the incident.

The verdict found Lopez guilty of instigating public unrest, arson and criminal association, charges that had been brought forth by the Venezuelan Attorney General’s Office.

The prosecution called for convicting Lopez for instigating the violent events of February 12, 2014, when the opposition rallied to the Attorney General’s Office and confrontations led to violence. Three people died that day.

Lopez was also accused for the wave of violence unleashed in the country between February and May that year during anti-government protests which left 43 dead and more than 800 wounded.

Three students accused of participating in these violent protests were also found guilty and sentenced to between 4 and 10 in prison.

Voluntad Popular spokesman Freddy Guevara, who was present during the hearing, accused President Nicolas Maduro of having personally handed down those rulings.

“Those of us who know him know that Leopold Lopez is ready for this and more. They’re only making him and all of us stronger,” he declared.

In the afternoon, at least six people were injured during attacks by government supporters who marched to the courthouse to demand a guilty verdict for Lopez, a situation which gave rise to heated confrontation.

Despite the military cordon, the angry crowd attacked Voluntad Popular sympathizers with stones and sticks. Sympathizers were forced to retreat to neighboring streets.

Voluntad Popular published several photos on its Twitter account, showing how orange shirts (the color of Lopez’ party) were burnt by government supporters.