HAVANA TIMES — Delegates from 190 countries have gathered at the United Nations to begin talks on the first-ever global agreement regulating the arms trade.

According to arms control campaigners, one person every minute dies as a result of armed violence around the world.

The global weapons market is valued at more than $60 billion a year, and critics argue that a binding treaty is necessary to prevent guns from flooding into conflict zones and fueling wars and human rights violations.

The United States is by far the world’s largest producer, importer and exporter of armaments. “Believe it or not, bananas and bottled water are regulated more stringently than conventional weapons.

These are weapons that are killing 1,500 people every day, up to 750,000 a year,” says Suzanne Nossel, executive director of Amnesty International USA. “These are the real weapons of mass destruction, because they’re killing, year in, year out, person by person, family by family, village by village.”

AMY GOODMAN: We want to go to a clip, from the Amnesty International Secret Policeman’s Ball, of Russell Brand.

RUSSELL BRAND: Trade in both bananas and dinosaur bones have international treaties to regulate them.

RUSSELL BRAND: But not guns. Anyone can sell guns and bullets to dictators who regularly use these arms to kill their own people.

NOEL FIELDING: How many guns have you got on you? Forty-three?

RUSSELL BRAND: And how many bananas? Only two, because it’s regulated.

NERMEEN SHAIKH: Delegates from 190 countries gathered Monday in New York to begin negotiations on the first-ever global agreement regulating the arms trade. According to arms control campaigners, one person dies every minute as a result of armed violence around the world. The global weapons market is valued at more than $60 billion a year, and critics argue that a binding treaty is necessary to prevent guns from flooding into conflict zones and fueling wars and human rights violations.

The U.N.-sponsored meeting is taking place in the wake of mounting atrocities in Syria. Speaking Monday, U.N. human rights chief Navi Pillay said weapons are pouring into the country, leading to worsening violence in a 16-month conflict that has already claimed more than 10,000 lives.

NAVI PILLAY: There is the risk of escalation. The provision of arms to the Syrian government and to its opponents is fueling the violence. Any further militarization of the conflict must be avoided at all costs.

AMY GOODMAN: The United States is by far the world’s largest producer, importer and exporter of armaments. The U.S. produces almost 35 percent of all weapons globally. Russia is second at almost 15 percent, followed by Germany, Britain, China and France. The U.S., China, and Russia have all raised objections to different aspects of the agreement under discussion, while Britain is one of the co-sponsors of the treaty.

To find out more about the significance of these negotiations that are going on at the United Nations, we’re joined now by the executive director of Amnesty International USA, Suzanne Nossel. Prior to Amnesty International, she served as deputy assistant secretary of state under Hillary Clinton.

Suzanne Nossel, welcome to Democracy Now! Talk about this arms treaty that’s going on at the United Nations.

SUZANNE NOSSEL: Sure. This is a landmark discussion and negotiation that’s just getting underway at the United Nations to try to put the finishing touches on a treaty effort that’s been underway for about a decade to, for the first time, really forcefully regulate the transfer of arms. And as you heard in the clip, believe it or not, bananas and bottled water are regulated more stringently than conventional weapons. These are weapons that are killing 1,500 people every day, up to 750,000 a year. These are the real weapons of mass destruction, because they’re killing, year in, year out, person by person, family by family, village by village. 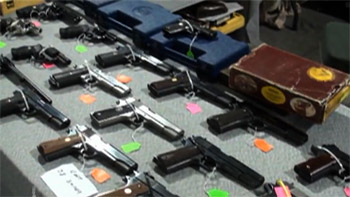 And so, this effort, countries coming together to negotiate a treaty that will impose obligations on states, require them to do their due diligence to make sure that weapons are not being transferred under circumstances where they’ll be used to perpetrate atrocities and human rights abuses, making sure that they are keeping records so that the transfers are documented and you can trace the paper trail and figure out where the weapons are coming from, making sure that U.N. Security Council resolutions imposing embargoes to stop the transfer of weapons are being enforced. So, this is a critical effort. And the position that countries take, their willingness to support a strong treaty, is really going to be essential.

AMY GOODMAN: But how is it that it’s regulated less than bananas and bottled water? How does this work? Who is stopping this regulation?

SUZANNE NOSSEL: Well, you know, as you said, the world’s biggest arms exporters and importers are some of the world’s most powerful countries. All five permanent members of the U.N. Security Council make that list. The U.S. is at the top of that list. And these are mega, you know, hundred-billion-dollar industries around the world. And they’re profiteers. There are security interests that fuel this. So, it’s not surprising that there’s been resistance to a strong conventional arms control regime. There are some weak regulations that have been put in place, but they haven’t been enforced and implemented. And the obligations they create just aren’t strong enough to really make a difference.

NERMEEN SHAIKH: But the fact that there are these five permanent members who are the largest producers, what effect is that likely to have on a binding treaty actually being concluded at the end of these negotiations, because presumably their interests remain the same as they’ve always been?

But we still have some serious concerns. They’ve been reticent about the inclusion of ammunition within the scope of the treaty. We feel that’s essential. There are 12 billion bullets created, manufactured around the world every year. If those aren’t regulated and controlled, you know, they’re going to find their way into weapons, and they’re going to be utilized. So there are some concerns about the U.S. position. There are concerns about the positions of Russia and China—you know, Russia, top of the list right now, funneling weapons into Syria for the use of the Assad regime in its onslaught against its own people. So, this is a high-stakes negotiation. There are a lot of interests at stake.

AMY GOODMAN: Republican Senator Jerry Moran of Kansas is at the forefront of opposition to the arms trade agreement on Capitol Hill. Last year he led 44 senators in expressing concern about the dangers posed by the treaty to private gun ownership. Senator Moran discussed the treaty during a speech last month at the Heritage Foundation.

SEN. JERRY MORAN: I’m concerned that this treaty will infringe upon the Second Amendment rights of American gun owners for the following reasons. First, while the draft paper nominally applies only to, quote, “international arms transfers,” unquote, it defines such transfers as including transport across national territory. It requires the signatories to monitor and control arms in transit and to enforce domestically the obligations of the treaty by prohibiting the unauthorized transfer of arms from any location. This implies an expansion of federal firearms controls that would be unacceptable on Second Amendment grounds.

AMY GOODMAN: Senator Moran went on to say that to protect Second Amendment rights the treaty should not apply to certain weapons.

SEN. JERRY MORAN: It should not include manufacturing, assembly, possession, transfer or purchase of small arms, light weapons, ammunition or related materials that are defined under domestic law as legal for private ownership in the United States, nor should it contain any open-ended obligations that could imply any need to impose controls that would have any domestic effect on any or all of these items.

AMY GOODMAN: That’s Kansas Senator Moran. Suzanne Nossel, how powerful is the National Rifle Association in opposing this? Are they active?

SUZANNE NOSSEL: They are active, although the arguments they’re putting forward really have no bearing on the treaty. They’re talking about, of course, Second Amendment rights, the right of private individuals to have access to guns for personal use here in the United States. This treaty is about the international transfer of weapons to fuel conflicts around the world. So it’s an apples-to-oranges argument that they’re making. And the points he’s raising really are not issues that are going to be in any way threatened or impinged upon by this treaty. So, it’s a straw man, it’s false, and we should not be distracted by the effort to sort of mix these two issues together. This is about the international arms trade, not about Second Amendment rights here in the United States.

NERMEEN SHAIKH: Well, Amnesty has been pushing, of course, understandably, to have this treaty be legally binding. Who would enforce such a treaty in the event that it’s concluded?

SUZANNE NOSSEL: Yeah, it will create reporting obligations that will be carried out through an international monitoring system, so countries will come forward and report on their transfers. And then, you know, that will create the ability of the U.N. Security Council, other U.N. bodies, Navi Pillay, rights groups, to call attention to the transfers that are fueling conflicts that are putting arms in the hands of those perpetrating human rights atrocities. So, it will create more transparency and a series of tools that can be used to apply pressure to prevent these transfers.

SUZANNE NOSSEL: I think the thing to recognize here is that U.S. regulations and law already impose obligations preventing the transfer of arms in situations where those arms will be used to perpetrate human rights abuses. So, that scrutiny already takes place under our law. The real thrust of this treaty is to impose those obligations globally, so that the U.S. isn’t the only one carrying out that due diligence and that other governments have to. And I think, you know, given all the concern about this now-16-month conflict in Syria—

SUZANNE NOSSEL: —that this is something people can agree on, both sides of the aisle.

AMY GOODMAN: Suzanne Nossel of Amnesty International USA. thanks so much.