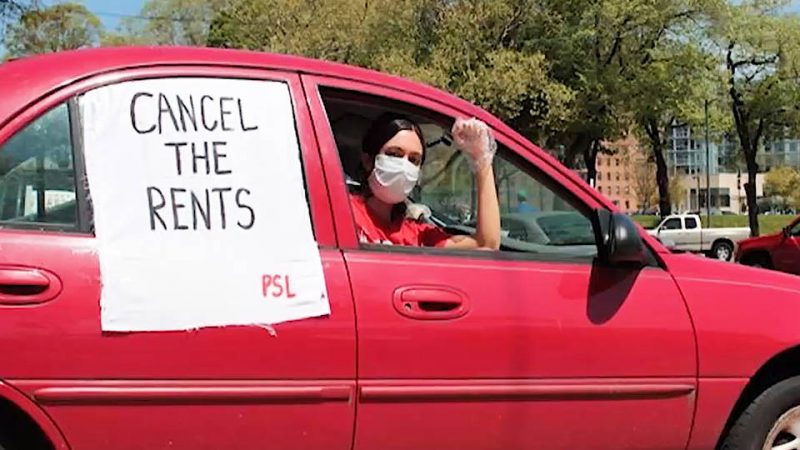 HAVANA TIMES – People in cities around the country took part in a “Cancel the Rent” car protest Saturday. The action was organized by the Party for Socialism and Liberation. This is a protester speaking in Los Angeles.

Protester: “Democrats and Republicans pass legislation which bail out the banks and not the people! And that’s why we’re here today. They’ve been telling us for years — for years — that we don’t have the money, that we don’t have the power, to bail out the people. But somehow, in crisis, when the economy has to shut down, when capitalism has to take a back seat, the workers become the essential class.”

Activists have been calling for a moratorium on rents for the duration of the coronavirus crisis as unemployment numbers continue to surge. President Trump signed off on the latest $484 billion coronavirus relief bill Friday, but neither of the relief bills passed so far includes any assistance for people struggling to pay rent.

The Congressional Budget Office is projecting the unemployment rate in the U.S. will remain high for at least the next 18 months as the U.S. recovers from the pandemic. The unemployment rate is projected to be at 10% at the end of 2021 — higher than it ever was during the Great Recession following the 2008 crash. It is expected to be between 14 and 16% through the fall of this year, though some analyses of the true rate of unemployment put that number much higher.

20 thoughts on “Activists Hold “Cancel the Rent” Protests Around USA”