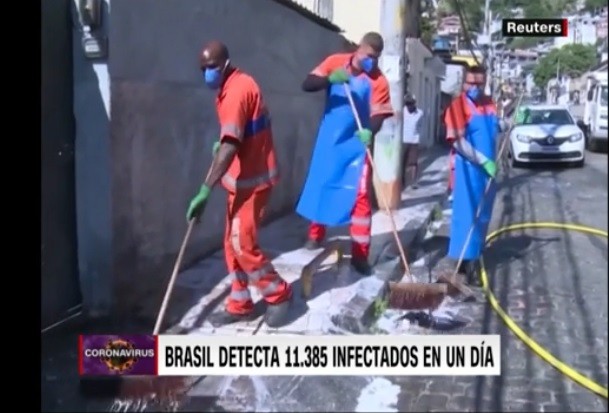 HAVANA TIMES – Brazilian President Jair Bolsonaro on Thursday urged regional and local authorities to open up the economy, despite Covid-19 infections and deaths hitting a new record in the country.

Brazil has confirmed 188,974 infections and 13,149 deaths, according to figures published by the Health Ministry late on Wednesday.

A total of 11,385 infections were registered within 24 hours, a new record. Nearly 750 people died in that period.

The South American giant is now the country with the sixth-largest number of Covid-19-infected people and deaths in the world, according to Johns Hopkins University.

Several Brazilian states have announced they will not obey government instructions to add beauty salons, barber shops and sports academies to the list of economic sectors considered essential, which are allowed to operate despite the pandemic.

Bolsonaro, however, called on state governors and municipal officials to reconsider the different restrictions they have imposed, saying a bankrupt economy could ultimately cost more lives than the novel coronavirus.

“We are going to be doomed to live in a country of poverty,” newspaper O Globo and other media quoted the president as saying.

“Are people dying? OK … I’m sorry, I’m sorry. But many, many more will die if the economy continues to be destroyed,” he said.

Bolsonaro warned of famine and “chaos” and said lockdowns were “not the way.”

The government estimates that the economy will contract by 4.7 per cent this year.

Bolsonaro has come under widespread criticism for his handling of the disease in the country where many hospitals have no more room in intensive care units and bodies are being buried in mass graves.