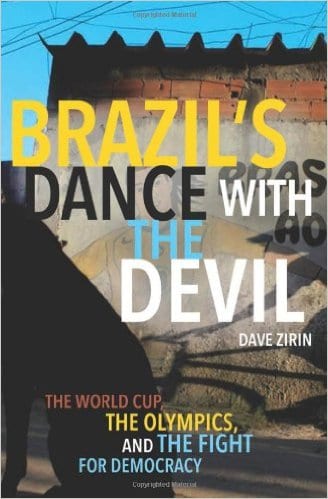 HAVANA TIMES — More than 10,000 athletes across the world have convened in Rio de Janeiro, Brazil, for the 2016 Summer Olympics, which has its inauguration ceremony this evening.

Rio is the first South American city ever to host the Games, which come as Brazil is battling an economic recession, a massive Zika outbreak and the recent ouster of its democratically elected president, Dilma Rousseff. Human rights organizations have also expressed concern about the impact of the Games on Rio’s most vulnerable communities.

Residents of Rio’s favelas have spoken of battles against forced evictions, police violence and wasted spending. About 85,000 police, soldiers and other security officials will patrol the city during the Games. We get the latest from Dave Zirin, sports editor for The Nation magazine and author of “Brazil’s Dance with the Devil: The World Cup, The Olympics, and the Fight for Democracy.”

AMY GOODMAN: This is Democracy Now!, democracynow.org, The War and Peace Report, as we turn now south to the Olympics. The 2016 Summer Olympics open tonight in Rio de Janeiro, Brazil, the first South American city ever to host the Games. More than 10,000 athletes across the world have convened in Rio’s Olympic City for one of the most widely watched sporting events of the year. This comes as Brazil is battling an economic recession, a massive Zika outbreak and the recent ouster of its democratically elected president, Dilma Rouseff. Human rights organizations have also expressed concern about the impact of the Games on Rio’s most vulnerable communities. Residents of Rio’s favelas have spoken of battles against forced evictions, police violence and wasted spending. About 85,000 police, soldiers and other security officials will patrol the city during the Games. Chair of the International Olympic Committee Thomas Bach said, despite the difficulties, the city is prepared to host the event.

THOMAS BACH: There were huge, huge challenges, if not a deep crisis. And nevertheless, you see that this country, that this city, this Organizing Committee has managed to transform a city and to put Olympic Games on a stage.

AMY GOODMAN: Well, to talk more about the Rio Olympics, we’re joined now by Dave Zirin in Washington, D.C., a sports editor for The Nation magazine. His recent article is called “The Last Dance: On Heading to Olympic Rio.” He’s the author of Brazil’s Dance with the Devil: The World Cup, the Olympics, and the Fight for Democracy, also host of Edge of Sports.

Welcome to Democracy Now!, Dave. So tell us about the significance of these Olympics and where they’re happening, in Brazil.

DAVE ZIRIN: Well, I mean, the significance is that they’re happening in a city that was not the same city that won the Olympics eight years ago. The Rio that won the Olympic bid in 2008 was a Rio that was experiencing stratospheric economic growth rates. It was a city that was fighting inequality. It was a city that actually argued—their leadership argued, and people believed, that hosting the Olympics would be a tool for fighting inequality, that would help and aid the social democratic vision that was being put forth by the president of the time, Lula, and his successor, Dilma Rousseff. So, the Olympics were seen as something that was integrated into a broader project of a more democratic and more just Brazil.

Fast-forward eight years later, and it’s a dystopia, relative to that original vision. Unemployment is skyrocketing, I mean, almost double what it was even a couple of years ago in Rio, when the situation was even stagnating then, and a lot of unrest. At this point, we’re talking about about 61 percent of people in the whole entire nation of Brazil say they wish the Olympics had never darkened their door. All they’ve brought is debt, displacement and hypermilitarization.

And I got to tell you, Amy, in looking at this closely, one of my deep concerns about the media coverage from Western Europe and the United States is that it looks at all these issues that Rio is facing, and it looks at them from the perspective of this is about Brazil’s governmental dysfunction, this is about Rio’s inability to host these Games. And what they don’t look at is that what we’re seeing is a feature of what happens when the Olympics come to town, because you know this, Amy, because I’ve been coming on your show to talk about the Olympics since, I think, Beijing in 2008, and we have this same discussion. The only thing that changes is the scenery.

AMY GOODMAN: Amnesty International says police killings are up over 103 percent in the last year. In 2015, one in every five homicides in Rio was a killing by police.

DAVE ZIRIN: I mean, this is absolutely stunning. I mean, say that statistic again so the audience hears it. Rio, which is one of the most dangerous cities in the Western world, one out of five homicides are committed by police. Relative to a year ago, police killings are up 135 percent.

And when I was in Rio in May, I interviewed politicians across the board and people who live in favelas, pro-Olympic people, anti-Olympic people, and I asked them this very basic question, Amy. I said, “Is this increase in police violence, is this because the Olympics are coming to town? Is this a pre-Olympic crackdown like we’ve seen in so many other cities?” And interestingly, there was broad-based agreement across the board that this actually was not because of the Olympics, that all of these recent killings has much more to do with the economic crisis, which has meant the starving of a community policing program that had actually helped decrease violence in the favelas. And what it’s been replaced with instead is what is referred to as BOPE policing, or think about it as SWAT team policing, because it’s much more cost-effective. And the more cost-effective way of policing poor neighborhoods in Brazil—and this might sound familiar to some neighborhoods in the United States—is you just go in with a militarized police force, shoot and ask questions later.

And so, even—and this is the thing, though, that you can’t separate that from the Olympics, because whether we’re talking about shoddy policing that’s done on the cheap with a high body count, whether you’re talking about the 30 percent cuts that have taken place in health in the state of Rio, while they’re trying to control the Zika outbreak, or whether you’re talking about cuts in education that are so extreme you’ve had hundreds of high schools occupied by students and teachers, all of these crises are taking place side by side with a $12 [billion] to $20 billion Olympic project that’s just swallowing money.

AMY GOODMAN: Can you talk about Dilma Rousseff now? I mean, as they say, they’re going to put her on trial, that could lead to impeachment. They’ve already removed her as president.

DAVE ZIRIN: Yeah. I mean, and this is going—this is beginning to take place just this week. And it’s interesting that it happens the same week that her predecessor, the person who got the Olympics, Lula da Silva, once the most popular politician, literally, in the world, has been brought up on obstruction charges, obstructing the investigation into the bribery scandals that have affected every facet of Brazilian politics.

I think what’s so interesting right now is that their plans—when I say “their plans,” I’m talking about the people who organized the coup against Dilma—aren’t quite working out as they thought. Like, their plan, I believe—and I think this is what a lot of observers inside of Brazil believe—is that they impeached her very specifically at a time so they could wait the six months, because that’s what it says in Brazil’s constitution—it’s a six-month wait between impeachment and conviction—so it could take place within the shadow of these Olympics as a kind of kabuki theater to say to the world, “Brazil is now under new management. The economy is up and running again. We’re now a safe place to invest. You don’t have to worry about, you know, any of our profits being used to fight inequality or all the things that were objectionable about the Workers’ Party.”

And yet a funny thing’s happened on the way to that neoliberal paradise. And that funny thing is that the economy has not stabilized. The new president, Michel Temer, is more unpopular than ever. And so, we’re in a situation now where I think there’s a lot of uncertainty about what’s going to happen when Dilma finally goes up for that final vote to actually be removed from office, because there’s a vacuum at work right now. There’s no credible political voice that’s in a position to take her place.

And that’s why one of the most widely spread photos that’s going viral right now is a torchbearer named Tarcisio Gomes, and people can look this up and find it online. It’s on my Twitter feed. He was one of the torchbearers for the Olympics. And right in the middle, what he did was he dropped trou. He dropped his shorts. He was wearing a leopard thong, and on each side of his thong he had the words “impeach Temer.” So, you had a little bit of protest going on that we might call “cheeky.”

2 thoughts on “Brazil’s Dance with the Devil: 2016 Rio Olympics”