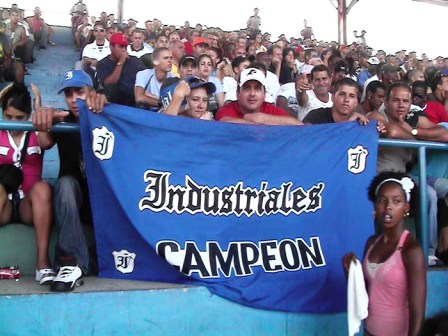 The hero was the young sensation Stayler Hernandez who drove in the go ahead run with a double and Raiko Olivares added the insurance run with a sacrifice fly, both in the top of the tenth.

In winning its 12th league championship —more than any other squad— Industriales played from behind all season only assuring a playoff slot with a victory run in the last third of the regular season.

Misael Silverio Mesa, the fourth Villa Clara hurler, was the losing pitcher, while Joan Socarrias, who closed the last 2.1 innings for Industriales, was the meritorious winner, not allowing a hit while striking out five of the eight batters he faced.

Villa Clara, the clear favorite in the finals based on statistics, finished as the runner ups for the second consecutive year having lost to Havana Province in the previous championship series.

Playing at home, Villa Clara had a 2-1 lead going into the sixth when Industriales scored twice to take the lead on solo homeruns by Alexander Malleta and Rudy Reyes. Two more runs in the seventh on an RBI single by Yoandri Urgelles and then an error by VC first baseban Ariel Borrero allowed another, giving the Liones a 5-2 lead.

However, Villa Clara was not about to lay down and play dead. In the bottom of the eighth they managed to even the score on a three-run homer by second baseman Yandrys Canto Ramirez, scoring Ramon Lunar and Ariel Pestano who had singled, and tie the game at 5-5 in spectacular fashion.