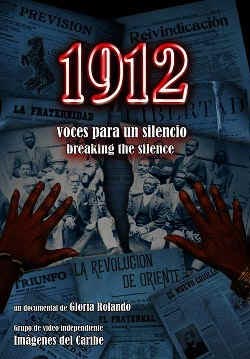 HAVANA TIMES, Nov. 2 — Braving a heavy downpour on Friday October 14, 2011, over fifty people including diplomats from Barbados, Trinidad and Tobago, Haiti, Saint Lucia, Bahamas, Congo, Nicaragua and Bolivia; historians and other special guests were shaken and brought to tears, during the premier of the second chapter of the documentary “1912, Breaking the Silence”, at the beautifully restored Casa del Alba in Havana.

This powerful documentary was built and supported by the input and analysis of many of Cuba’s most respected historians, researchers, sociologists, educators and a wealth of never before seen documents, pictures, newspapers clippings, first class images and a moving musical background.

Like most families or nations with an ugly story, some members of society may choose to believe this event never happened, others may wish it will be forgotten and die, while others may try to keep it hidden under the rug or shoot the messenger.

For nearly 100 years, most of Cuba’s history books dedicated two paragraphs or less to describe derogatorily what was known as the “Little War of the Negroes”, saying it was caused by racist, separatist black troublemakers, who revolted against a democratically elected government, forcing it to restore law and order in the country.

More than 3,000 men, women and children were massacred, followed by a witch hunt and the long lasting fear that was instilled in blacks and mixed raced Cubans through beatings, lynching and murders to conform or else.

The root cause of this heinous crime was never a subject matter of any history department or the mass media, always ready to denounce similar crimes committed elsewhere.

Gloria Rolando, both the director and producer, has made a monumental contribution to Cuba’s historiography, with an honest attempt to help us set our record straight, a plea for justice for the victims and a unique opportunity to begin the healing process without which, Cuba will never become a beacon of justice and social equality.