Throughout the day, thousands of people marched by the Jose Marti Memorial of the emblematic Revolution Square, before a giant black and white image of Fidel Castro dressed as a guerrilla, guarded by an honor guard of the Revolutionary Armed Forces of Cuba (FAR).

Many expected to see the urn with the ashes to be able to give the last farewell, but the cremated remains of the Commander in Chief were not there but in a room of the FAR.

Stored in a wooden urn and surrounded by white flowers, the ashes were honored today by Cuban President Raul Castro, state television showed.

Fidel Castro’s body was cremated on Saturday by his express wishes before his death, as Raul Castro said when he broke the news at midnight on Friday.

The sepulchral silence was the tonic among the thousands of people waiting their turn under an intense sun. To speed up the tribute, the organizers installed three identical points, formed by white flowers, the image of Fidel Castro and his military decorations.

“He was always there in the face of any situation facing the country. I can’t imagine life without him, “said Carlos, a worker at a state tourism company while lining up with other co-workers.

Eulalia, retired and a resident in Havana, did not want to miss the moment as her grandson pushed her wheelchair around the Revolution Square.

“It was he who gave us dignity as a people, he was the one who made us feel proud to be Cubans. What were we before 1959?” she asked.

Children in school uniforms also waited their turn. In Havana the school and work calendar is maintained, but the centers are authorized to interrupt the day in order to attend the place of the homage.

There were also students from other countries with their medical uniforms. “Thanks to Fidel I am a university student and when I graduate from medicine I want to give back to my people everything I have learned here thanks to him,” said a young student from the Congo who is studying in Cuba.

In 1998, Fidel Castro created the Latin American School of Medicine (ELAM), which has given free scholarships to thousands of poor young people in developing countries.

The tributes will continue on Tuesday throughout the country, where books have been installed in each neighborhood signing adhesion to the principles of the Cuban Revolution as defined by Fidel.

In the afternoon on Tuesday a gathering is scheduled with the presence of international leaders and personalities. 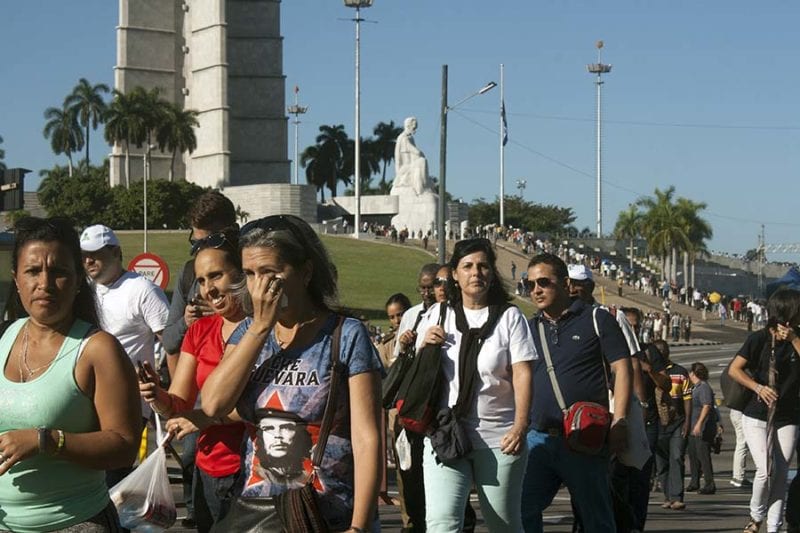 Cuba’s political allies of the countries that form the Bolivarian Alliance for the Peoples of Our America (ALBA) will be the main protagonists at the funeral rites.

Nicolas Maduro, from Venezuela; Daniel Ortega, from Nicaragua; The Bolivian Evo Morales and the Ecuadorian Rafael Correa have already confirmed their attendance.

On Wednesday Fidel’s ashes will begin a 600+ mile journey by land from Havana to Santiago de Cuba passing through 13 of the 15 Cuban provinces. The trip will recall the “Freedom Caravan” carried out by Castro in January of 1959 after the victory over the dictator Fulgencio Batista, only in the reverse direction.