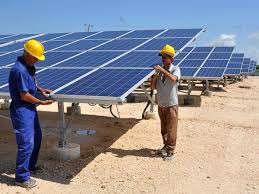 The photovoltaic park has more than 5,000 solar panels and Cuban specialists believe they have the ability to supply the daily electricity consumption of about 750 homes.

The new power plant is in addition to another opened in April this year, with about 14,000 solar panels. They are part of a network of seven solar farms will be opened gradually in the coming months in different parts of the country.

The primary energy source used in Cuba is oil, but the island is able to produce only half the crude it needs daily, while the rest is purchased from Venezuela through payment facilities and soft loans.

Within the new economic policies of the government of Raul Castro an important goal is to reduce imports, so it is prioritizing renewable energy production in a country with favorable natural conditions.

Cuba currently produces four percent of its electricity from renewable sources. Besides solar energy these include, hydropower, biomass, and wind energy.

One of the greatest hopes of the Cuban executive to carry out a successful reform package is to obtain income from oil drilling in the country’s Special Economic Zone in the Gulf of Mexico.

The Cuban government estimates a drilling process about five years and forecast a decade producing over half a million barrels of oil per day, which would be sufficient for self-sufficiency and export.

According to a study by the US Geological Survey, the potential of the basin north of Cuba is 4,600 million barrels of oil and 9.8 trillion cubic feet of natural gas, although the Caribbean nation has higher expectations.

The Spanish company Repsol and the Russian Zarubezhneft failed in the first attempts at deep-water off shore drilling. Sources at the island’s oil company, CubaPetroleo, noted geological complications.

Despite the failure in the initial drillings, the Cuban president recently told the nation’s parliament that the search for oil in the Gulf of Mexico will continue.

“We will insist on further drilling for oil in the Gulf. I don’t believe that nature is so unjust and cruel that of the three countries bordering the Gulf, it would give the Americans and Mexicans oil, leaving Cuba aside,” he said in the National Assembly in July.

2 thoughts on “Cuba Invests in Solar, While Still Betting on Oil”