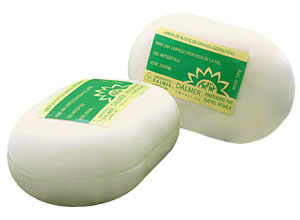 HAVANA TIMES — A new, Cuban-made medicinal soap has been on sale at different State markets around Havana for two months. According to press reports, the new product “has been proven efficient in the elimination of underarm, vaginal and foot odors.”

The personal hygiene product is sold at 25 Cuban pesos the unit (equivalent to 1 Cuban Convertible Peso, or $1.10 USD). According to an official press note published by the Cuban News Agency, the soap’s “powerful deep-cleansing and germicidal action” is among its noteworthy properties.

Composed of sunflower-seed oil and ozone gas (ozonized oil), the product was developed by Cuban laboratories five years before its unrestricted sale to the public was authorized.

Though no dermatologist has yet supported this claim, the report also states that the new soap can be used to treat juvenile acne.

Gladys Soto, a resident of Havana’s neighborhood of Cerro, used the product to combat “a nasty case of impetigo”, successfully eliminating the bacterial infection from her grandson’s head. Arelys Villa, from Centro Habana, reports magnificent therapeutic results after using it on her sunburned skin.

The soap is manufactured by Cuba’s DALMER laboratories. The laboratory’s director and head researcher indicated that “dermatologists and other specialists are currently studying the soap’s clinical and medical potential.”

He added that no allergic reactions to the product have been reported to date.

Dalmer S.A. is the exclusive distributor of all products studied, developed and produced by Cuba’s National Scientific Research Center (CENIC), an institution belonging to the country’s Ministry of Science, Technology and the Environment.

The Cuban company Suchel Regalo aims to produce the soap on a larger scale, so that it may be sold across the country.

At the close of last year, Union Suchel – Cuba’s flagship manufacturer of perfumes, cosmetics and personal hygiene items, pledged to improve its toilet soap offer and the taste of the toothpaste sold to the public in regular Cuban pesos.

Personal hygiene products such as soap, detergent and toothpaste stopped being included in the country’s ration booklet in January of 2011. The public must now purchase these items at State markets or hard currency shops.

Complaints about the quality of the soap and toothpaste sold in Cuban pesos have since been more frequent.