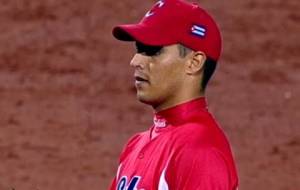 HAVANA TIMES — The five-game exhibition series between the Cuban national team and the USA university selection is now history after the Cubans came back with a solid 4-1 win in Game Five to finish 2-3 in their tune-up for the upcoming Toronto Pan American Games, reported Ray Otero of baseballdecuba.com.

On Monday, starter Lazaro Blanco pitched 4.2 innings allowing four hits and one unearned run while walking three and striking out four. Livan Moinelo came on for 3.1 innings of hitless, no-run relief and Hector Mendoza pitched the ninth to get the save, working his way out of a bases loaded jam after allowing a hit and two walks.

Cuba opened the scoring in the top of the second on an RBI single from Yulexis la Rosa driving in Urmari Guerra who had also singled and advanced to third on a ground out and a wild pitch.

In the third, Alexander Malleta blasted a solo homer to right field to put the score at 2-0. It was Cuba’s first homerun in the five game series. It came off losing pitcher Tanner Houck, one of the three hurlers that no-hit Cuba in the opening game of the series.

Malleta had a big night going 3-for-4 with two runs scored and an RBI. Guerra was 2-for-4 with two RBIs in the fifth on a double off reliever A. Puk.

The lone USA run came in the fourth. Nick Banks and was then forced out at second on a roller from J.J. Schwartz on what should have been  a double play.  However a throwing error by second baseman Rudy Reyes to first allowed Schwartz to advance to second. B. McKay followed with a blooper to center. Adolis Garcia dove for the catch, had the ball in his glove, but was unable to retain it allowing Schwartz to score from second.

The same Cuban squad plays the US Pan American team in another exhibition game tonight at 7:00 p.m. EST in North Carolina. The challenge is a big one for the Cubans as the US team made up completely of minor leaguers belonging to MLB organizations is a full notch stronger than the university selection of prospects they just faced and struggled against.

One thought on “Cuba Wins Finale 4-1 over USA on Monday, Plays US Pan Am Team Tonight”