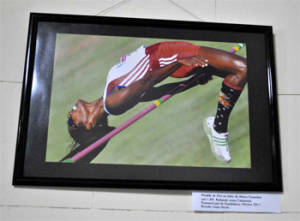 HAVANA TIMES, Dec 1 — Even if you’re not a big sports fan or interested in spending hours of your life plopped in front of a TV trying to find out who will win a game, you can’t deny that sports photos — when they capture the emotion of athletes — can be a good show.

To enjoy some of the highlights of the last Pan American Games in Guadalajara, one can go to the headquarters of the Cuban Journalists Association located at the corner of 23rd and I streets). There you will find shots of the shot put champion Misleidis Gonzalez, discus gold-medalist Yarelis Barrios (captured on film as if doing a ballet pirouette), and judo champion Yanet Bermoy with her face lit up.

In addition to a softball pitcher, there’s Janser Garcia (who was also the surprise silver medalist in swimming) and other images of boxing, cycling, wrestling and fencing.

Until mid-December UPEC will hosts this exhibit of 31 moments captured by the lens of three photojournalists: Ricardo Lopez Hevia, with the Granma newspaper; Juan Pablo Carrerra of AIN (Holguin), and Ismael Francisco from Prensa Latina.