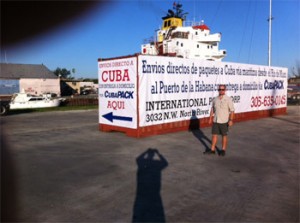 HAVANA TIMES — The first direct maritime shipment in over a half century between Miami and Havana will leave out on the ship Santa Cecilia, which is loaded with humanitarian aid for the island, and will arrive in port on Thursday.

The shipments will take place on a regular weekly basis and the cost to shippers will be US $5.99 per pound. Deliveries to recipients in Cuba will be made through the company CubaPACK.

The Miami-based company International Port Corp obtained licenses to perform these operations, which are opening an unprecedented floodgate in limited trade relations between the two countries.

Up until now commercial shipments had been limited to US agricultural products purchased by the Cuban government.

2 thoughts on “Direct Maritime Shipments from Miami to Havana Begin”