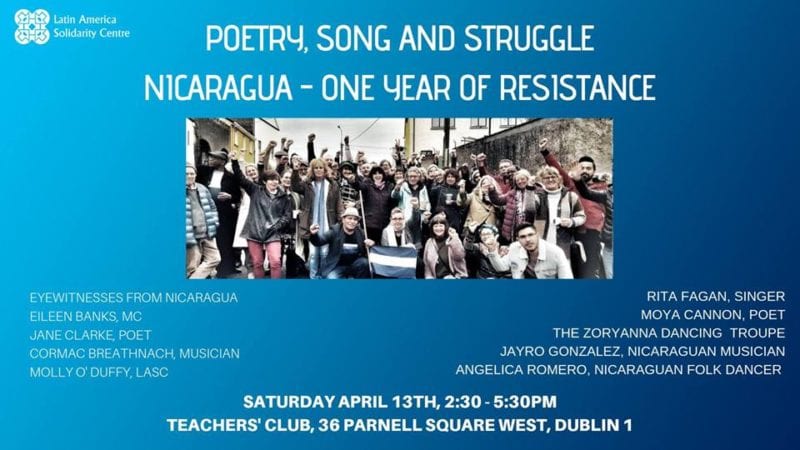 HAVANA TIMES – On the 18th of April 2018, a wave of protests began in Nicaragua against a proposed change to the social security system. Since then, over 300 people have been killed and over 2000 injured in a brutal crackdown by the government under Daniel Ortega, with many more detained or exiled from the country.

Many of us are people who traveled to Nicaragua on Solidarity Brigades in the 1980s to show our support with the revolutionary Sandinista government in the face of the US-backed Contra War. Yet, over the years, we have been disappointed by the increasingly reactionary turn of the Ortega regime.

Since protests began in April of last year, state repression has increased dramatically, with feminist, campesino and civil society activists and organizations in particular singled out by government forces. Hundreds of people continue to be held in state prisons for participating in the protests.

Join us on April 13th for an afternoon of poetry, song and performance to celebrate and mark a year of resistance to the Ortega-Murillo government, and to reflect on the repression that has left so many dead, or afraid to return to their country.

We will be joined by poets, artists and musicians from Ireland and Nicaragua, and will hear the stories of Nicaraguans who have been personally affected by the government crackdown.

We also recommend: Irish Who Traveled to Nicaragua in Solidarity Send Out SOS

One thought on “Dublin, Ireland Event to Mark a Year of Resistance in Nicaragua”