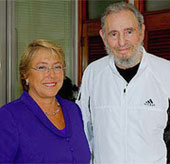 HAVANA TIMES, Feb. 13.— Chilean President Michelle Bachelet met on Thursday afternoon for 90-minutes with former Cuban President Fidel Castro. Later she told the press: “He looked good,” adding, “As always he was very interested about issues facing Chile and has a wealth of information and statistics… always asking details.”

Earlier in the day at the inauguration of a business seminar, Bachelet criticized the US blockade against Cuba which she said “always seriously affects the living conditions of the Cuban people and especially the current crisis.”

In the evening Bachelet and President Raul Castro attended the opening ceremony of the annual International Book Fair in Havana, where Chile is the guest country and dozens of its publishing houses are participating.