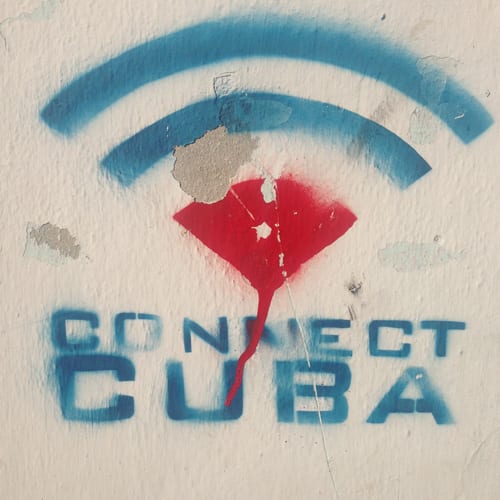 HAVANA TIMES – What would have been unthinkable a couple of years ago is now becoming a reality. Google has been reported to be setting up shop in Cuba.

And what does this imply to the Cuban people? The Holy Grail: cheap and fast Internet.

It was in fact President Obama who pre-announced the deal on the first day of his history-making trip to the island. In an interview with ABC News, Obama stated that “one of the things that we’ll be announcing here is that Google has a deal to start setting up more Wi-Fi and broadband access on the island”.

The first Google initiative is already well underway in the studio of well-known Cuban artist Alex Leyva Machado, better known as  “Kcho”. Kcho has joined forces with the US technology giant on a project “Google + Kcho.Mor”, which plans to provide free internet access 70 times faster than what is currently offered by Etecsa, Cuba’s state-owned internet provider.

It is reported that Google has already installed a studio in Kcho’s cultural centre in the neighborhood of Romerillo in Havana. Fully equipped with laptops, cell phones, and virtual-reality goggles, the studio will be open to the public five days a week.

As part of a broader cooperative effort to improve the island’s connectivity (which remains one of the lowest in the world), the director of Google in Cuba, Brett Perlmutter, has confirmed that this is “only a beginning” and “demonstrate[s] what can be possible in the future.”

As any Cuban, or recent visitor to the island knows and has experienced, last year’s introduction of public Wi-Fi hotspots across the country have proved to be a highly inadequate attempt at increasing the island’s poor connectivity.

High prices, slow and unreliable connection, shortage of Internet cards (which are all bought out of Etecsa shops and resold by touts at a higher price), and total lack of privacy are amongst the daily gripes of any Cuban attempting to use the state-owned Wi-Fi service to check Facebook, send an email or speak to family and friends abroad.