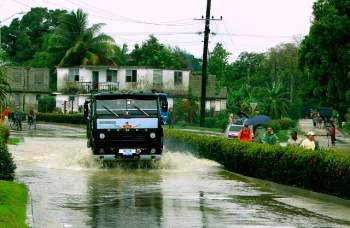 HAVANA TIMES, June 17 — While the Cuban capital Havana remains under the effects of a severe drought the far eastern province of Guantánamo has received considerable rainfall during the first half of June.

Accustomed to heavy showers, life in Guantamamo City continues unabated with people out in the streets despite the accumulated water in the low-lying areas of the capital.