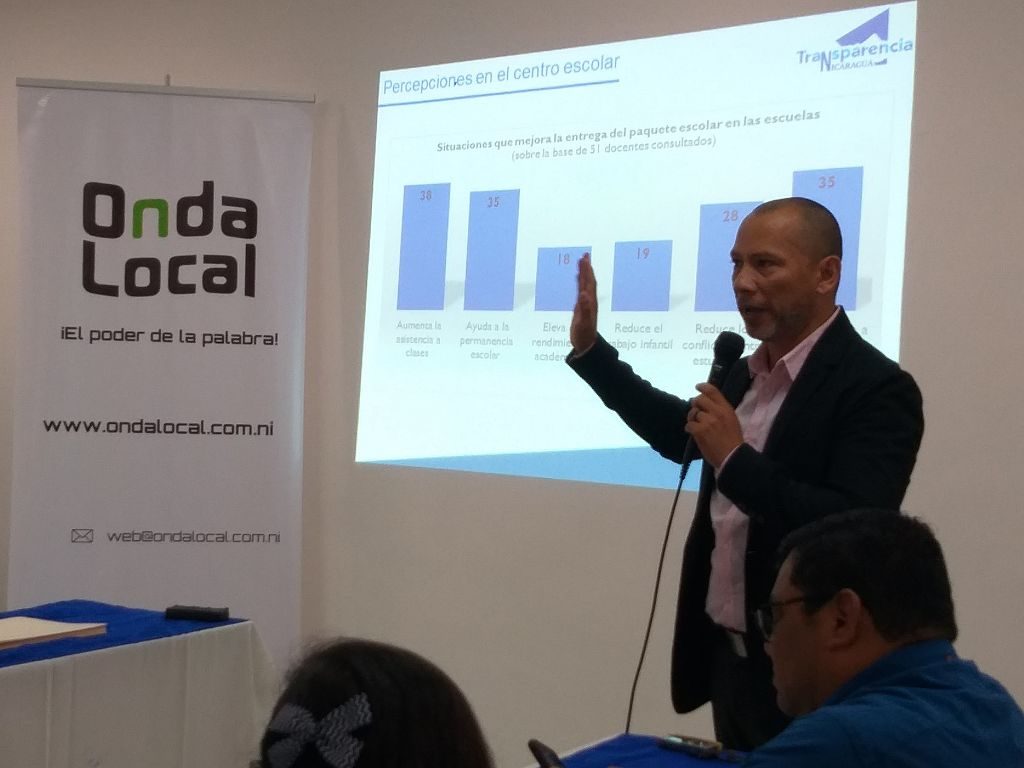 HAVANA TIMES – Lack of government controls and limited transparency in the programs implemented by the Ministry of Education (MINED), are some of the main findings of the research “Transparency in the education sector: the case of solidarity school packages*”, carried out by “Onda Local” radio and the “Transparencia Nicaragua” (Transparency Nicaragua) collective.

The study reveals that in MINED there is no access to public information, accountability mechanisms are handled discretionally, there is no public audit report of programs implemented and the public procurement system does not conform to international standards.

The research was carried out between April and July of this year, period in which they consulted a sample of 51 teachers from Nandaime, Masaya, Leon and Matagalpa. The objective was to obtain the perceptions and practices associated with transparency in the management of the school package program. For this they used the Targeted Transparency Methodology of the Inter-American Development Bank and the analysis of integrity in social programs of Transparency International.

The researcher Alex Bonilla specified that the only public data on school packages, which the Ministry of Education distributes since 2010, are the liquidation reports of the General Budget of the Republic, where it only refers to how much is spent, “but the most important finding that we were able to verify is that the purchases they are making do not adjust to international standards,” he said.

Bonilla explained that the Ministry of Education has used an “inadequate” purchasing system, because that institution makes “simplified or minor purchases” when it should be making public tenders as mandated by Nicaraguan legislature and international transparency standards.

On the other hand, the researcher stressed that the management of the school package programs is exclusive to MINED, so there is a centralization of the information, a restricted use of the information and a violation to the principle of legality of the rules.

Similarly, researcher Dayra Valle emphasized that MINED did not only stop publishing information but “has removed (from its website) information from previous years,” a situation that goes against the Law on Access to Public Information.

“To receive the request for information, (MINED) officials claim that they need authorization,” Valle explained. For her this represents a setback because “before they received the request, even if they bamboozled you to not provide the information,” she continued.

Valle also explained that there is “a stigmatization of the requestor” of public information, because the institution also requires a large amount of information from those who go to their offices. Furthermore, the researcher also perceived a sense of “fear” in the handling of public information. “They manage a policy of information secrecy, and it is so that only a few officials of the ministry itself have access to it and it is concentrated in the ministerial offices and from there to the Vice Presidency (Rosario Murillo).”

“If one enters the websites of the different state institutions, including MINED’s, one finds outdated information, incomplete information and information that in many cases can be questioned in terms of its veracity,” Valle pointed out.

The main recommendation that the researchers make to MINED is that “they should consult the actors of the program in order to know their perception” about the impact of school packages. This would allow a “better planning management and program implementation.”

*According to the government, the school packages include notebooks, pens, pencils, ruler erasers, sharpeners, colored pencils, backpack along with plastic glasses, plates and spoon for their school snacks.