After the Nicaraguan government threw MESENI out of Nicaragua last December, this body continues to monitor the human rights situation in the country

HAVANA TIMES – The Inter-American Commission on Human Rights (IAHCR) has gathered over 1500 testimonies from victims of state repression in Nicaragua, during the year that the IAHCR’s Special Monitoring Mechanism for Nicaragua (MESENI) has been functioning.

On June 24th, the IAHCR reached the one-year mark for MESENI’s installation in Nicaragua. MESENI is the mechanism used by this international body to track the human rights situation, the persons covered by precautionary measures and make recommendations to the government to help resolve the crisis.

“During MESENI’s first year of work, the IAHCR sent the State (of Nicaragua) 88 petitions for information regarding victims of state repression and actions taken to protect their human rights,” the international body stated.

In a message posted on Twitter, the IAHCR emphasized that MESENI’s experience in Nicaragua has been one of the “most extensive on-the-ground missions in the history” of the organization because they have had “direct contact with victims and events, and they have continued to inform the international community in real time.”

Thrown out by the Ortega government 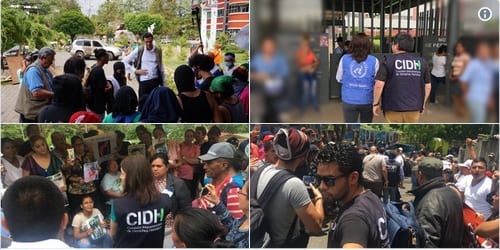 Over a 12-month period, the IAHCR “published 54 press briefings alerting the international community on the development of the crisis in Nicaragua,” the organization stated. This is nearly one press briefing every week.

During this same period, the organization “ordered or amplified 72 precautionary measures in 39 resolutions,” with “more than 180 beneficiaries: students, human rights defenders, journalists, civic and rural leaders, members of the Civic Alliance for Justice and Democracy (opposition), prisoners and family members of the victims.”

Since the beginning of its mission in Nicaragua, the IAHCR presented the government of President Daniel Ortega with a list of 15 recommendations to guarantee the protection of human rights.

The organization’s recommendations included an end to repression, respect for peaceful protest, the disarmament of paramilitaries, the investigation of violence and the obstruction of health services, the acceptance of international observation and guaranteeing freedom of the press.

The Civic Alliance, the government’s counterpart in negotiations to resolve the crisis, claims that the executive branch ignored the IAHCR’s recommendations.

The IAHCR has accused the Nicaraguan government of committing “crimes against humanity” since the rebellion erupted against Ortega, on April 18, 2018.

At least 326 people have died in the 14 months of crisis in Nicaragua, according to the IAHCR, although local organizations believe that statistic is closer to 594. The government only recognizes 200 dead.

The IAHCR published on Twitter that “as a consequence of state repression in Nicaragua, at least 300 health professionals were fired, 144 students were expelled, more than 70 journalists went into exile, and more than 70,000 Nicaraguans fled to neighboring countries.”

Within the Organization of American States (OAS), a process to apply the Inter-American Democratic Charter to Nicaragua is underway because of the interruption of the institutional order. If and when this charter is applied, the Central American country’s membership in the OAS will be suspended.

One thought on “IACHR Gathers 1500 Testimonies of Repression in Nicaragua”