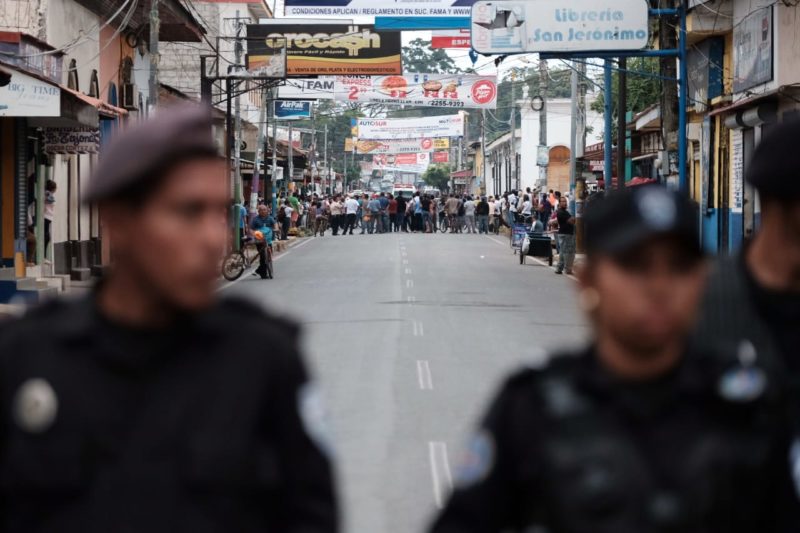 The occupants of the church, who had spent nine days there under police siege, were taken to a hospital to evaluate their medical condition.

HAVANA TIMES – A delegation from the Catholic Church, together with the Red Cross, arrived at the San Miguel Church in Masaya, to evacuate family members of the political prisoners and priest Edwin Roman.  They, together with seven other occupants of the church, had spent nine days under police siege, without food and with very little water.

The delegation was able to secure their release from the armed police blockade, and they were transported to the Vivian Pellas metropolitan hospital in Managua to evaluate their medical condition, since the majority had begun to suffer the effects of the prolonged fast.

The mothers and family members began a hunger strike in the Church on Thursday, November 14, to demand the liberation of their imprisoned sons, brothers, or husbands, who are political prisoners of the Ortega-Murillo regime.

The regime responded by ordering the suspension of water and electricity to the Church, and setting up a tight cordon of armed police to prevent any water or supplies reaching those inside.  For nine days, the Police blocked all humanitarian aid to the demonstrators, including water, oral rehydration solution and medicine.

“The hunger strike is suspended, due to their state of health,” declared a family member of one of the mothers, who began the voluntary fast last week.

The evacuation was made possible through the mediation of Cardinal Leopoldo Brenes, Apostolic Nuncio Waldemar Stanislaw Sommertag, and the International Red Cross, with the regime of Daniel Ortega.

On the morning of this Friday, November 22, the police impeded a second attempt of civic groups to bring water, rehydration solution, insulin and food to the San Miguel parish.  The police and the Ortega mobs blocked their access.  Later in the day, these same groups blocked media access to the evacuation of the demonstrators.

On  the same day as the negotiated rescue, the Police once again blocked humanitarian aid to the regime’s latest political prisoners: sixteen young people, members of the Civic Alliance and the Blue and White National Unity, who were arrested on Friday, November 15,  after bringing water to the women within the church and to the priest, Father Edwin Roman.

All of these events transpired following the presentation of the OAS High Level Commission’s report confirming that “[the Ortega regime] has altered the democratic order”.  The report will be discussed in the OAS Permanent Council next week.

Who was in the Church?

One of the citizens inside the church was Karen Lacayo, sister of political prisoner Edward Lacayo, better known as “The Monimbo Wolf”, who was captured by hooded civilians last March 15, in the community of El Ostional, Rivas, where he was attempting to cross over into Costa Rica, fleeing the persecution of the Ortega-Murillo regime.

Luisa Guevara and Martha Alvarado, wife and mother of political prisoner Melkissedex Lopez, were also inside the Church. Lopez was arrested in Managua last December, falsely accused by the regime of armed robbery.

Heysell Palacios, sister of Denis Javier Palacios, was present in the San Miguel Church.  Denis Palacios was detained on July 23, 2019, after voluntarily presenting himself at the Masaya police station in response to a citation. Heysell had spent the past nine days on a hunger strike with the other family members.

Another seven people had also been blockaded inside the church: parish priest Edwin Roman, who had insisted on remaining with his parishioners; Yonarqui Martinez, lawyer for the political prisoners; Masaya journalist Marvin Powel; dona Flor Ramirez, affectionately known as the huipil lady; and two of the regime’s released political prisoners.