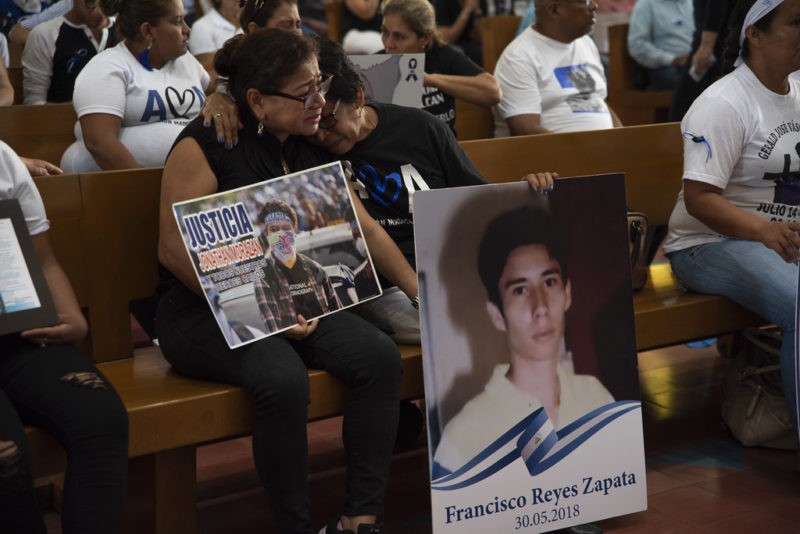 Fanatical supporters of Daniel Ortega continue profaning the graves of the assassinated protesters and harassing other victims of the repression.

HAVANA TIMES – On November 2, the Day of the Dead, the April Mothers’ Association demanded respect for the memory of their children who had been murdered by the regime of Daniel Ortega and Rosario Murillo. Several of the tombs of these victims have been profaned by fanatics of the regime, motivated by impunity and the messages of hatred that are broadcast by the government.

The petition for respect was added to the demand for justice, truth, compensation, and the guarantee of no repetition that the Mothers of April have been making since the day their children were killed. To them, the profaning of the graves is a form of re-victimizing them “for the simple act of demanding justice,” emphasized Josefa Meza, one of the leaders of the mothers’ group.

One of the desecrated tombs was that of Josue Mojica in Diriamba. Unknown persons went to the graveyard on the Day of the Dead and destroyed the photograph there of Mojica and a small ceramic structure that covered the burial vault. The families of the deceased blame fanatics from the regime.

The parents of tiny Teylor Lorio – killed at 14 months old by a stray bullet during a police and paramilitary attack in June 2018 – didn’t visit the cemetery this past November 2nd. The graveyard where the body of the toddler rests was besieged by police, so they changed course to attend a mass in the Managua Cathedral organized by the April Mothers’ Association. From there, they prayed for the soul of their son, and added their voices to the clamor for justice for the victims of the repression.

In addition to his grief, Nelson Lorio, baby Teyler’s father, hasn’t been able to overcome the trauma of his son’s death, “because it wasn’t only that he was killed, but also that he died in my arms,” he recalled. Lorio went into exile for a while, but returned to Nicaragua, “because the struggle Is here, and as a father I’m going to continue demanding justice for my son.”

After the Mass was celebrated, the April Mothers’ Association, the Blue and White National Unity, the Civic Alliance and other independently organized citizens called out the names of the 328 mortal victims of the repression and demanded that the Supreme Court magistrates bring the perpetrators to justice.  “Alba Luz Ramos,” the guide yelled. “And if he was your son?” replied the group. (Ramos is the head of the Supreme Court).

Juan Sebastian Chamorro of the Civic Alliance said the viciousness displayed by the followers of the regime in desecrating victim’s graves “borders on madness” and is a direct consequence of “the discourse of hate and their attempt to cancel out the Nicaraguan people who have protested,” he underlined.

Chamorro urged the family members to continue resisting and not to give up in their demand for justice.

In another part of the city, Cardinal Leopoldo Brenes celebrated a Mass for the soul of the faithful who were buried in the Managua General Cemetery.  He noted: “We must respect our graves, because those are saints resting there, I believe that the saints are here, and here is where we guard them, here we remember them.”