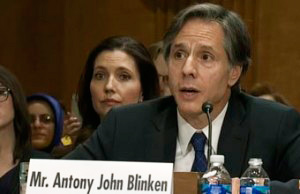 HAVANA TIMES — One of the closest foreign policy advisers in the White House said Wednesday that President Barack Obama will not take executive action to ease the embargo on Cuba. He noted that any change of policy towards the island depends on the regime of Raul Castro showing “significant changes”.

“Unless Cuba is able to demonstrate that it is taking significant steps, I don’t know how we could move forward in our relationship,” said Antony J. Blinken, deputy national security adviser, during a hearing in the US Senate.

Blinken appeared before the Senate to testify at his first confirmation hearing for the post of Assistant Secretary of State, nominated by Obama. After his introduction he answered the questions in a session chaired by the Cuban Bob Menendez, chairman of the Senate Foreign Relations Committee.

And near the end of the two-hour hearing, Senator Marco Rubio took his turn to interrogate Blinken about his opinions about the situation in Venezuela, the crossroads of the negotiations between the government and the FARC in Colombia, and Cuba.

Regarding Cuba, Rubio called for clarification on recent reports that over the next two years of his presidency, Obama could issue executive measures on Cuba to remove barriers of the embargo and promote the normalization of relations with the Castro regime.

Rumors about that possibility have increased in recent weeks following a barrage of editorials from The New York Times asking the administration to renew its policy toward the island.

Blinken denied it and said that such a policy change is not foreseeable in the midst of the attitude of the Cuban regime to maintain prisoner the US contractor Alan Gross, sentenced to 15 years in prison.

“Anything you could do in Cuba should be consistent with the law and secondly, everything in the future should be done in full consultation with Congress,” the official said.

In the wrong direction

Blinken maintained that the Cuban government has been moving in the wrong direction, increasing political arrests and keeping in prison Alan Gross, whose unjust incarceration remains an obstacle to the normalization of relations.

Blinken said the president has ideas on how to promote the democratization of Cuba and on how to prepare the Cuban people for future changes. He said that if an opportunity arises to move in that direction “he may take advantage of it.”

“But that depends on Cuba and the actions it takes,” he noted.

Rubio insisted that the types of changes in Cuba sought by the Obama administration should not only be in the economic sector.

Blinken said that any progress in the bilateral relationship will be determined by “democratic reforms, not simply by economic reforms.”

At the end of the session, Menendez spoke to suggest that Washington should not accept that Cuba attends the Summit of the Americas in Panama in April 2015. He further recalled the recent position of the Cuban regime in opposition to a UN resolution to sanction North Korea, backed by the vast majority of the international community.

Menendez also recalled that Havana insists on the release of three Cuban spies in US prisons in exchange for the release of Alan Gross, when they are very different cases. He also mentioned the name of Ana Belen Montes, a former Pentagon official sentenced to 25 years, as part of the long arm of Cuban espionage on US soil.

Blinken is expected to be confirmed for the position in the State Department before the congressional end of the year recess.