HAVANA TIMES – As voters prepare to pick one party list from the many choices to be offered this weekend in France, activists are concerned about a low turnout here and in other countries, as in past European Parliament elections.

The very first European vote in 1979 was the only one to bring more than 60% of French voters to the polls. Over the last twenty years, no European Parliament vote has drawn more than half of French voters, with a lower than 43% turnout in the most recent, 2014.

Weak participation by average citizens tends to favor more extreme parties, whose loyal followers are also more enthusiastic. The fear is more of a move towards the right, whose anti-immigrant and anti-European speeches may motivate voters throughout Europe worried about their communities and traditions.

Among the 34 European party lists validated in early May for French voters, there are plenty of extremes! Both the right and left would clearly benefit from a consolidation of similar-minded parties, but there are strong egos involved here.

Since Emmanuel Macron shattered the dominance of established center left and right parties in 2017, many victims formed smaller new parties. Some will not see any of their candidates take a seat for the next five-year session of the European Parliament in Brussels, since a minimum 5% of votes is required to win even one member. Fifteen parties seem to be the most active, with posters appearing on most of the many public walls reserved for this advertising. Many of these lists are led by losing presidential candidates from the 2017 French elections.

No other public advertising exists during this short three-week campaign, other than internet sites and mailings to supporters. Any public radio or television coverage must give equal time to all participating parties.

France is not alone is its record recent abstentions on these votes. Any country with over 50% participation is doing well, even those with legally mandated voting. Voters in Eastern European countries, which are among the smallest and newest members, show less interest. Slovakia had the lowest record in 2014 with only 13% of voters casting a ballot. Many Europeans simply do not have faith that their votes or their voices have an impact on European decisions.

There is only one party list in what I would call the center of this French election. Also leading in current polls, this is the Renaissance party of Emmanuel Macron, French president and founder of The Republic on the March party for his 2017 election. Now it is On the March for Europe, led by Nathalie Loiseau, former Minister of European Affairs for the Macron government, who had to step down to run for a European Parliament seat

On the center right are two: the Union of Democrats and Independents, or The Europeans, led by a former minister for Nicolas Sarkozy, and Louis Giscard d’Estaing, son of a former French president. Their slogan is “the center right of progress.” The Republicans led by Laurent Wauquiez bring together what is left of the major center right party over many decades, who place themselves “between a failed government and the extremes.” 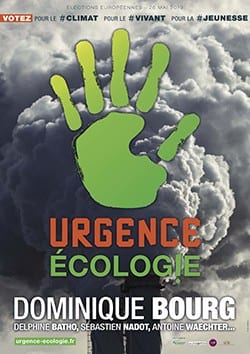 The Socialist Party led by Raphael Glucksmann and the new European Spring party led by former socialist Benoit Hamon hold center left positions. The Socialists are “ecologic AND socially concerned” while Hamon attempts to begin a true pan European party based on the foundations of “democracy, solidarity, green prosperity and fighting poverty.”

Among the widely known and more radical parties on the left competing for European Parliament seats are Jean-Luc Melanchon’s France Unbowed party led by Manon Aubry, the Workers’ Struggle with Nathalie Arthaud, the French Communist Party list of Ian Brossat, and two Ecology parties I place on the left: Europe Ecology of the Greens led by Yannick Jadot, and the younger oriented Ecological Urgency list. Their poster features a crudely inked green hand with smoke from an ecological disaster in the background and is one of only two without a photo of party leaders.

The other headless party poster, in pink featuring a cute kitten or puppy, is that of the Animalist Party, for the rights of non-human Europeans. “Animals matter, and so does your vote!” They really don’t belong on the ideological left, but they favor ecological positions for a cleaner environment and are extreme only in terms of the uniqueness of their platform.

There are plenty of choices towards the extreme right. The most well-known among them is Marine Le Pen’s National Gathering or Rassemblement Nationale (RN) party, after a name change from the National Front.

Several party lists have been formed by former National Front members or former Republicans. Nicolas Dupont-Aignan’s Stand Up France has “the courage to defend the French!” and Francois Asselineau’s Popular Republican Union favor moving “together for Frexit.” Both are also former presidential candidates from 2017.

Florian Philippot left the National Front to form Together-Patriots and Yellow Vests, who also want to “leave the European Union.” There are a few yellow vests protestor who support this party, but it is by no means the choice of their majority. Almost all left and right parties claim support from and for this protest movement that started last October and continues to motivate many who had not been politically involved in France.

Many young voters surveyed between 18-24 years old have said they will not vote this Sunday, so all parties are anxious to convince them to take a stand. Macron’s Renaissance party list has many recent converts from 2017 and may do best among these younger voters, but the President has lost credibility since many of his election commitments have not yet been implemented.

The two front-runners in this election seem to be Macron and Le Pen, but many others will gain at least a few seats in the European Parliament.

France will send 74 new members to Brussels, based on the percentage each party gets from the entire French vote. The United Kingdom remains in Europe for now and will still send new members to Parliament. The makeup of this 751-member legislative body will be decided for the next five years by this weekend’s votes in all member states, with over 400 million potential ballots.

This is the second largest democratic election on the planet, behind 900 million voters for the Indian legislature. French trends are echoed somewhat in other large European member countries but there are too many variables to accurately predict results.