The assault was directed by Fidel Dominguez, Leon’s chief of police.

They spent more than an hour and a half trying to knock down the iron gate around the building where the station is located.

HAVANA TIMES – Government-allied mobs and officials of the National Police attempted to forcefully break into the installations of the independent radio station Radio Dario in the Nicaraguan city of Leon on Thursday afternoon, September 26. Anibal Toruno, the station’s director, affirmed that the operation was under the direction of the city’s police chief Fidel Dominguez.

Toruno said the siege lasted just over an hour and a half. At least four police patrol cars arrived at the radio station’s installations, accompanied by men on motorcycles wearing ski masks. The latter attempted unsuccessfully to knock down the iron gate protecting the house where the radio station operates. The original installations of Radio Dario were burned down in April of 2018.

“It’s not unusual to see them harassing the radio station, although, yes, they’d stopped doing so after the release of the political prisoners in June of this year. Now, since my return to Nicaragua on September 7, they’ve begun doing it again,” stated Toruno. He asserted that his main concern wasn’t for the material objects there, but for the physical safety of his collaborators at the station who at that moment were inside.

On Wednesday, September 25, the director of Radio Dario participated, together with Carlos Fernando Chamorro and Sergio Leon, in a special session of the Inter-American Commission for Human Rights (IACHR). During this session, they denounced the persecution unleashed against the country’s journalists, and the horrors and dangers facing the independent press at the hands of the regime of Daniel Ortega.

“It’s surprising to me that exactly one day after denouncing before the IACHR the levels of repression that Fidel Dominguez enforces in Leon, besieging the media outlets and private homes, that he should reply by carrying out this assault on the radio,” Toruno noted. 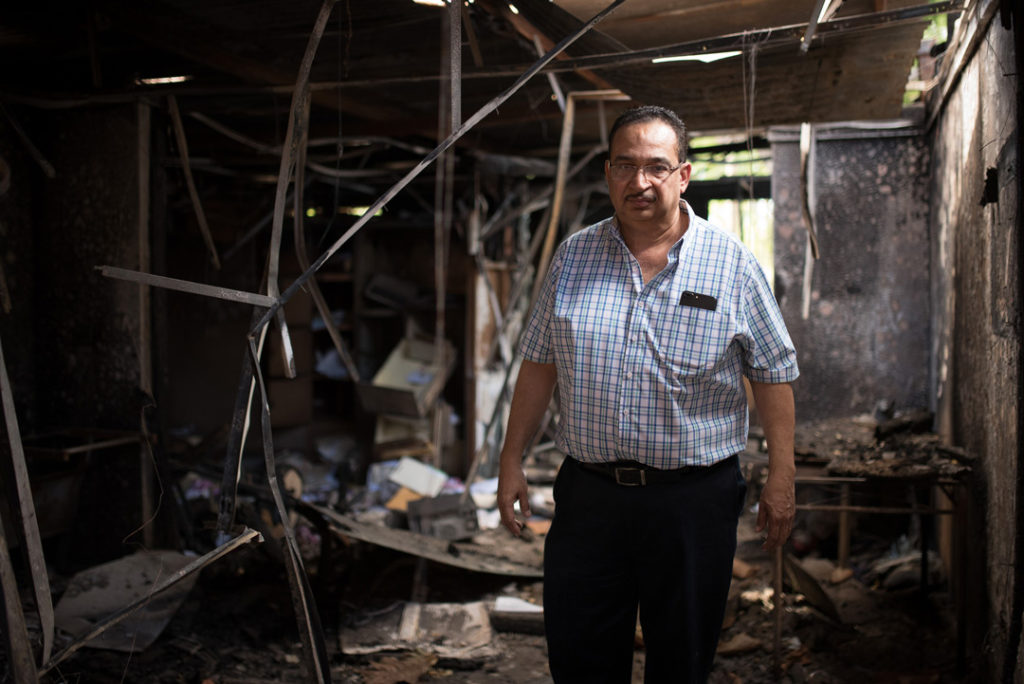 The radio owner declared that he’s filed complaints at all levels regarding this new aggression towards his station. “The only thing we can do is make a strong stand at a national and international level for them to pay the pay the price of their actions, and make evident the levels of violence the regime promotes, utilizing the police to do so,” he added.

Leon police chief Fidel Dominguez Alvarez was named to his postu on August 23, 2018. “The principal orientation that we have is for the families in Leon to return to living in the secure environment we had prior to April 18, and for tourism and all activities to return to normal,” he declared on the day he was sworn in.

Since this date however, Dominguez has directed countless assaults on citizens and journalists. On November 28, journalist Carlos Jiron of Radio Mi Voz [“My Voice Radio”] in Leon, was beaten by police officials who intercepted him while in route to this local station. Jiron was held and beaten by the agents. He affirmed later that the police operation had been directed by the Leon Chief of Police, who ordered the agents accompanying Jiron to confiscate his possessions and strip him.

Jose Pallais, constitutional lawyer, and Freddy Rugama Calero, owner of a handicrafts workshop in Leon, complained in February of this year of the abuse of power and mistreatment that they received from Dominguez. “He came up to me and said, ‘I’ll kill you just because I want to! You’re a coup promoter.’ He told my workers that he was going to grab them by the balls and cut them off,” Rugama told Confidencial.

After threatening Rugama with death, the Leon police chief proceeded to the home of former opposition deputy Jose Pallais. Dominguez didn’t find the attorney at home, and according to Pallais, the agents then beat and threatened his wife.

“Chief Fidel Dominguez said that he’d come to arrest me for being a coup promoter. My wife asked him for an explanation. He grabbed her forcefully and struck her in a violent way,” Pallais told the media.  Pallais is currently a member of the Civic Alliance for Justice and Democracy.

“He has the people of Leon in suspense. This is a bloodthirsty man, a bandit who came with force to try and plant chaos, tragedy and repression in Leon,” said Toruno.