The plant would produce 300 megawatts at a cost of US $700 million, although sources close to the company couldn’t say “where that number came from”.

HAVANA TIMES – The government’s announcement about the proposed construction of a plant fueled by natural gas that could produce up to 300 megawatts of electricity has awakened some skepticism among experts in the sector.  The plant, to be installed in Puerto Sandino on Nicaragua’s Pacific coast, has an estimated cost of US $700 million dollars. Experts wonder who will finance a project of this magnitude, given the international sanctions that threaten to infect the process.

Salvador Mansell, head of the Ministry of Energy and Mining, announced that the Nicaraguan electricity companies Disnorte and Dissur have signed a Power Purchase Agreement for twenty-five years with the US company New Fortress Energy LLC.

Both electricity distribution companies are, on paper, the majority property of the TSK-Melfosur international consortium, formed in 2013 out of two mid-sized companies within the electricity sector, neither of which had any financial muscle or experience administering an entity like the one they were purchasing.

Up until now, it’s only known that one of the two principal stockholders of TSK-Melfosur has left the country and broken their ties with Disnorte-Disur distributing company, without any public knowledge of who is the president or the owner of the company controlled by Albanisa, the Nicaraguan-Venezuelan corporation that arose from the Venezuelan cooperation money and that works mostly in the oil and gas sector. 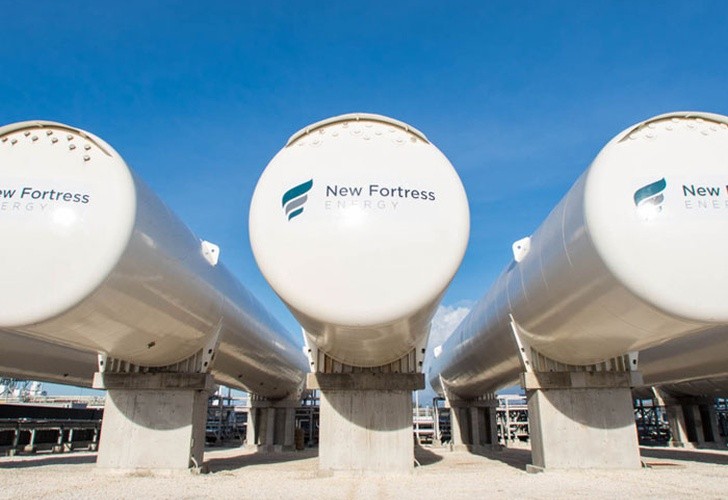 “I don’t know where that number (US $700 million dollars) came from, since “the company hasn’t specified the cost,” a source close to New Fortress Energy told Confidencial. The source requested that their name be withheld, since “I’m not authorized to speak for the company.”

“As a project, it’s technologically viable. That is, in terms of engineering, it’s possible,” assured attorney Cesar Arostegui, an expert in energy legislation. Arostegui’s chief doubt was whether anyone would be interested in investing their capital in a place like Nicaragua which presents such as high risk.

Another promise of a megaproject

The idea of a natural gas-powered electricity generating plant comes after Ortega has failed to realize at least five promised megaprojects, beginning with the inter-oceanic canal whose initial costs were calculated in US $40 billion dollars, a sum that later rose to $50 billion.

Before that, it was the oil refinery “Bolivar’s great dream”, in which some US $6.62 billion dollars was supposed to be invested. Then there was the Tumarin hydroelectric plant, whose initial estimated cost of over US $800 million had risen to US $1.1 billion when the project was abandoned in 2016.

The fourth largest in cost was the deep-water port to be constructed at Monkey Point in Nicaragua’s south Caribbean coast, valued at US $500 million. This, in turn, was to have been the first of three deep-water ports that the Albanisa Company would supposedly build, but never did.  Finally, there was the Chinese satellite announced at US $300 million which grew to $346 million.  That project, which would supposedly have been launched in 2016 was likewise abandoned.

Would the price of this electric plant affect the cost of electricity?

Engineer Fernando Barcenas, a consultant in electrical energy, highlights the “very high risk” that investors would assume, especially after Moody’s Investors Service degraded Nicaragua’s status from a B2 with stable perspectives to a B3 with negative prospects.

The recession that Nicaragua has experienced since the gross national product stopped growing in the second trimester of 2018 and that is on its way to becoming an economic depression, raises doubts about the viability of projects of this size.  Such large project usually make more sense within stable and growing economies.

It’s very soon to make any calculations about the impact of this agreement on the costs of electricity in the country, and very little is known about the terms of the contract, should it materialize at all. However, a source tied to the energy sector claimed to know that the accord included buying the megawatt hour (MwH) for US $110 dollars. Should this version be correct, it is far beyond industry standards.

Barcenas stated that in the current conditions for the international fossil fuel market, each MwH generated from bunker oil is sold at US $80 dollars, while that produced by gas, a cheaper and more stable raw material, is somewhere around US $65, and from coal, some $45 dollars / MwH.

Wes Edens, co-founder and co-director of New Fortress Energy, declared during the contract signing ceremony that “our goal is to bring clean and cheaper energy to the countries around the world that need it. This project … will allow us to build a plant to bring gas to the country and also to distribute energy to other companies,” according to reports on the official government website “El 19 Digital”.

On the same official website, Mansell said that the signing of the contract will permit “giving stability to the interconnected national system, by incorporating the 300 megawatt, natural gas generated plant that New Fortress will construct – the first of its kind to be installed in Nicaragua, and the largest in the history of our country.”

No real project yet

The source close to New Fortress Energy that was mentioned previously, stated that although they don’t know the price of the project as such, they’re not worried about the possibility that the bank could charge them high interest rates, because “this is a company that trades on the stock market, is worth some 3 billion dollars, and is backed by large capital resources.”

Additionally, he recalled that New Fortress Energy “did their due diligence (invested the needed intelligence or investigation) “to know first-hand who they’re meeting with”, which gives them the assurance of knowing that “we don’t have contracts or negotiations with any entity under sanctions.”

With respect to the guarantees, he recalled that the project is at a very beginning phase and that in reality, “there’s no project yet. What there is, is an agreement, which is the key step in initiating the project, but nothing is being constructed yet.”

“New Fortress Energy has to go through the permit process, studies, paperwork, and when they have all these, a year will be needed to construct the plant. There’s no project as such until all the permits are in hand, but I’m not in a position to give you a good approximation of the date of inauguration,” he said, accepting that it’s technically possible that it could be in the second half of 2021.

For that reason, they still don’t know what will be the price per megawatt; how much they’ll receive for the installed capacity; what the total amount of the investment will be; who is the owner of the land they’ll build on; or if they will be contracting or sub-contracting the construction work to national companies, something that he feels is perfectly possible, unless “New Fortress Energy itself develops the infrastructure.”

Our source avoided discussing the possibility that New Fortress could sell the contract to a third party, something that’s not impossible (unless the agreement or a law expressly forbids it), although he did emphasize that, to his knowledge, the company had never done anything like that.

New Fortress Energy is a relatively recent company (2014) that has shares on the stock market and is one of the companies that make up the Nasdaq index. It manages some twenty operations involving natural gas infrastructure and logistics (sale and transport of gas, but also the generation of electricity from this source) in the United States, Angola, Puerto Rico, Mexico and Jamaica.

The plans for Nicaragua include a regasification operation and the construction and operation of the electrical plant itself for a quarter century, in addition to facilities for unloading the gas at a point some 5 kilometers from the coast and a gas pipeline of that same length to transport the product.

Careful about the sanctions

The sanctions that have been leveled against companies, family members and functionaries close to Daniel Ortega and his government have raised the country’s risk level as well as the risk of contagion, which generally increases the rates for everything in the process, from the cost of financing to the payments for the insurance contracts.

Arostegui believes that “a United States investor would have to be very clear about what they’re doing and have close communication with their own government. Now, with the reclassification that Moody’s has just published, they’d have to be very adventurous to propose an investment of this size in Nicaragua.”

The lawyer also wonders if the necessary conditions will exist for this investment to be insured, because “all investments of this nature seek insurance policies to guarantee them. What insurance company would assume that risk, with the level of international questioning that Nicaragua has? How are they going to deal with this, or minimize it?

“Who would take on an insurance policy against what could be termed political risks?” he questioned, in reference to unpredictable factors like the exchange rate, or nationalization.

“Generally, the insurers come from the state, like the Eximbank in the United States which would be the natural insurer for an investment of US origin… If it’s not them – Who would it be?” he insisted.

Barcenas coincides with him in stating that he doesn’t believe that a US bank would finance this project, because they’d consider it susceptible to sanctions from Washington.

“I don’t know if later they’re going to look for a Wang Jing [the magnate with the failed Nicaragua canal project concession] to come in and speculate,” he warned, recalling that “There are speculators that think that in moments of crisis and high risk they can impose prices at whim to recover the investment,” as soon as possible.