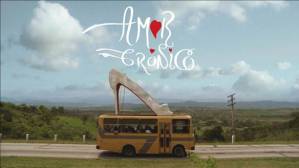 HAVANA TIMES — Starting this Saturday, Cuban cinemas will present the film Amor cronico, directed by Jorge Perugorria, based on the tour of Cuban-American singer Cucu Diamante through several cities on the island, reported the Prensa Latina news agency.

“I wanted to make a tribute to the Cuban cinema with this tour by Cucu, because everything I am I owe to the filmography of the island,” said Perrugorria (the star of Strawberry and Chocolate) at a news conference when referring to his second fiction feature.

According to the actor-turned-director, the project began at the “Peace without Borders Concert,” held in Havana in September 2009. “From the first moment, Cucu captivated the audience. It was a reunion with her motherland,” he said.