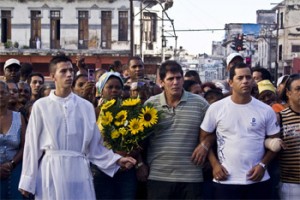 The Catholic leader asked the intercession of the Virgin “for all those who have responsibilities for governing our country, so they can continue advancing the necessary changes in the economic and social lives for which the Cuban people are hoping.”

Since August 2010, the statuette has traveled close to 20,000 miles throughout the island in commemoration of the 400th anniversary of its discovery.