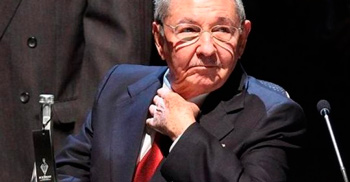 HAVANA TIMES — Cuban President Raúl Castro took to task the world’s largest financial institutions for not doing enough to help the developing countries and urged the creation of regional banks that may best deal with regional problems.

Addressing the Summit of the G-77+China being held in Santa Cruz, Bolivia, Castro said:

“As comrade Fidel Castro has said: ‘The resources exist to finance development. What’s lacking is the political will of the governments of the developed countries.’

“It is necessary to demand a new international financial and monetary order and fair commercial conditions for producers and importers from the guardians of capital, centered in the International Monetary Fund and the World Bank, and from the defenders of neoliberalism, grouped in the World Trade Organization, which are attempting to divide us.

“Only unity will allow us to make our ample majority prevail.

“That’s what we’ll have to do if we want the Agenda for Development, after 2015, which will have to include the Objectives of Sustainable Development, to offer answers to the structural problems of the economies of our countries, generate changes that allow a sustainable development, be universal, and respond to the different levels of development.”

The nations that constitute the ALBA [Bolivarian Alliance for the Peoples of Our America] — Cuba, Venezuela, Bolivia, Ecuador, Nicaragua, St. Vincent & the Grenadines, Antigua & Barbuda, St. Lucia and Dominica — created the Caracas-based Banco del Alba in 2008.

The subject of regional trade and financial cooperation was also discussed at the 2014 Summit of CELAC, the Community of Latin American and Caribbean States, held in Havana.

Castro went on to denounce the United States with the following statements:

“At present, the sovereignty of the states is transgressed, the principles of International Law and the postulates of the New International Economic Order are brazenly violated, concepts that attempt to legalize meddling are imposed, force is used and threats of force are made with impunity, the media are used to promote division.

“Still ringing in our ears is that threat against ’60 or more obscure corners of the world’ made by U.S. President George W. Bush obviously against all the member countries of the Group of 77.

“We must exercise our solidarity with those who are threatened with aggression. Today, the clearest case is the Bolivarian Republic of Venezuela, against which are used the most sophisticated means of subversion and destabilization, including attempted coups d’état, according to the concepts of unconventional warfare that the United States today applies to overthrow governments, subvert and destabilize societies.

“For more than 50 years, we have been the victims of a genocidal U.S. blockade, of terrorist actions that have taken the lives of thousands of our citizens and provoked costly material damage. The absurd inclusion of Cuba on the list of State Sponsors of International Terrorism is an insult to our people.

“As we have denounced, there is a growing promotion of illegal, covert and subversive actions, as well as the use of cyberspace to attempt to destabilize us, not only Cuba but also countries whose governments do not accept meddling or tutelage. This way, any nation can become the target of computerized attacks aimed at fomenting mistrust, destabilization and potential conflict.”

Castro ended by asking the Group of 77 members “to renew our common commitment to join efforts and close ranks to build a more just world.”