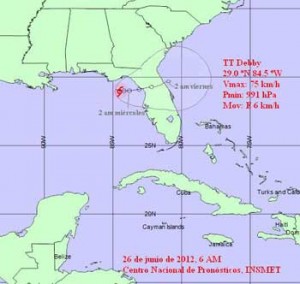 HAVANA TIMES — Tropical Storm Debby has changed course several times while churning slowly. First it was supposedly headed west, then north and now east for a probable landing in the coming days somewhere on the northwestern Florida peninsula.

After remaining stationary it is now moving west at 5 kph (3 mph).

Cuban forecasters said that the storm could gain some in intensity and organization before a landing and possible crossing, as a degraded tropical depression, the north of the Florida peninsula.

TS Debby does not pose a threat to Cuba.