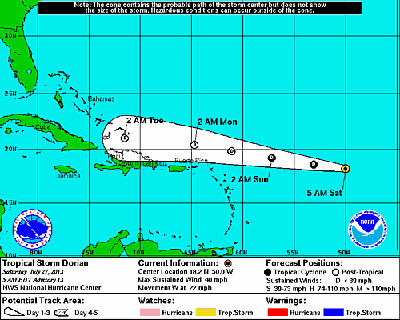 HAVANA TIMES — Tropical Storm Dorian continued to weaken early Saturday as it makes its way west from the central Atlantic. It is not projected to be a threat to Cuba.

National Hurricane Center (NHC) forecasters now say the weather system will be downgraded to a tropical depression before it has an influence on eastern Cuba next week.

In its latest advisory, the NHC said that no coastal watches or warnings are presently in effect. It did suggest that the northern Leeward Islands should continue to monitor the progress of TS Dorian.

The Cuban Weather Service (INSMET) will be issuing its lates advisoy on Dorian at 6:00 p.m. local time.