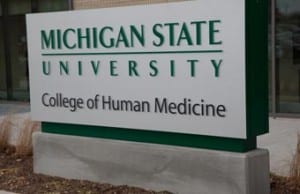 HAVANA TIMES — Medical students from Michigan State University (MSU) will take part in a US initiative involving immersion in Cuban hospitals next year, part of a program to expose future doctors to the island’s medical system.

Following the recent re-establishment of diplomatic relations between the United States and Cuba, MSU became the first university in the United States to establish an agreement with the Cuban government to develop a full-credit clinical course, a communiqué from the institution reported.

Starting April 2016, 16 osteopathy and general medicine students will participate in a training program meant to expose future medical doctors to what program promotes consider “a leader in the identification of social factors surrounding illness and healthcare prevention.”

“MSU has always been a good neighbor to Cuba and has offered cultural courses for its students over the past 14 years,” William Cunningham, dean of the Faculty of Osteopathic Medicine and one of the promoters of the initiative said. “However, this is the first time in which US medical students are able to walk down the halls of Cuba’s main hospitals in Havana and get credits for their experience.”

Currently, some 100 US citizens – mostly African Americans from low-income families and women – are pursuing medical studies at the Latin American School of Medicine (ELAM) in Havana. More than 100 US students have graduated from the school as of last year.

The new MSU program will be offered the first two weeks of April each year and will be open to fourth-year students enrolled in osteopathic and general medicine studies, through an application process. Students will be exposed to community medicine methods, obstetrics and gynecology, pediatrics and geriatrics, and will take part in rotations within different hospital departments.

To date, 30 students have applied to take part in next year’s program.