HAVANA TIMES — Alan Gross’s chances of returning to the United States from Cuba before 2024, took another backslide on Friday with the US State Dept. saying it refuses to negotiate with Havana for the release of the Maryland resident and five Cubans imprisoned for over 13 years in the US.

Last weekend Cuban diplomat Jorge Bolaños proposed an exchange of the “Cuban Five,” who are imprisoned in the United States, for the freedom of US citizen Alan Gross.

“There is no equivalence between these situations. On the one hand you have convicted spies in the United States and on the other hand you have an assistance worker who should never have been locked up in the first place,” Nuland stressed.

Cuba Sees the Situation Just the Opposite

To Havana, the Cuban Five are national heroes for having infiltrated Cuban exile terrorist organizations based in Miami that Washington has allowed to operate from its territory with impunity for decades.

The exile groups have carried out hundreds of documented attacks on Cuba and its interests on the island and abroad.

Meanwhile, the Cuban government sees Alan Gross, 61, as an agent of US policy designed to force a regime change on the neighboring island.

Cuban security tracked Gross as he made numerous trips to Cuba while working for a USAID “democracy” program.  He was accused, tried and sentenced to 15 years for distributing illegal communications equipment, considered a serious breach of national security. 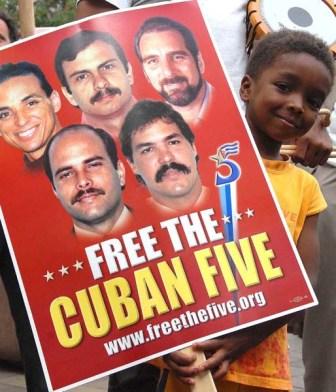 Josefina Vidal, director for North America at the Cuban Foreign Ministry, told the US television network CNN that her country wanted negotiations with Washington on the issue.

“We have made clear to the US government that we are ready to have a negotiation in order to try to find a humanitarian solution to Mr. Gross’s case on reciprocal terms,” Vidal said.

“We’re not advancing a specific formula, it has to be discussed among us. But definitely Cuba has a legitimate humanitarian concern related to the situation of the Cuban Five,” Vidal said.

The two cases and the diplomatic failure to resolve them is the latest conflict in over a half century of hostilities between the US and Cuba.

Washington maintains an embargo on Cuba to try to destroy its economy. It even penalizes third country companies operating in the US for doing business with Cuba.

Ordinary US citizens are also forbidden by their government from visiting Cuba without a special Treasury Dept. license.