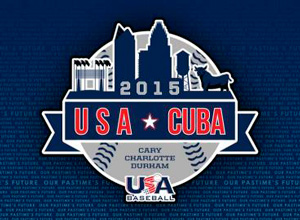 HAVANA TIMES — Cuba’s national baseball team was unable to contain Team USA batting on Saturday, losing by a lopsided 11-1 game in North Carolina. The US university selection guaranteed a best of five series victory with its third win in the first four games.

Cuba’s pitchers had allowed only allowed 5 runs in the three previous games, losing 2-0 twice and winning 5-1 in game three.

The 10-run, 16-hit win for Team USA ties the largest run margin for the Collegiate National Team over Cuba in series history, dating back to 1985, reported USA Baseball.com.

Robert Yyler piched four shutout innings of one hit baseball to get the win for the USA.

The US had home runs from Ryan Howard, 3-for-4, and Nick Banks, who went 3-for-5 with three RBIs.

Cuba’s lone run came in the final inning with a two out RBI double from Rudy Reyes.

The Cuban team has suffered two costly desertions since arriving in the US. Starting outfielder Yadiel Hernandez and third baseman Yander de la O, both abandoned the squad, reportedly in search of contracts in Major League Baseball.

The final game of the exhibition series takes place on Monday at 7 p.m. in Cary, N.C., at the USA Baseball National Training Complex. The game can be watched live on internet at: