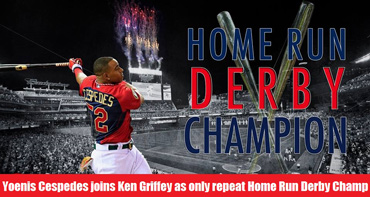 HAVANA TIMES — It is now official that the Cubans have indeed made an historic impact on MLB’s 85th annual Midsummer All-Star Classic. The Cuban contingent (five players) had already made history by arriving here in Minneapolis with their largest All-Star Game representation in 46 years. And now thanks to the Monday night power displays of Yoenis Céspedes in the 30th edition of the exhibition Home Run Derby, they will also depart with at least one true moment in the limelight, no matter what happens in the showcase Tuesday evening ballgame itself.

In the rain-delayed thirtieth renewal of the increasingly popular and always evolving Derby, Yoenis Céspedes wrote a piece of history by becoming only the second repeat (back-to-back) competition winner and the first since guaranteed Hall-of-Famer Ken Griffey Jr. a full fifteen years in the past. Céspedes in the process also joined Griffey (3) and Prince Fielder has the only trio to claim multiple crowns. And with his demonstarted enthusiasm for the event, it is almost a certain thing that the Oakland slugger will be back on several future occasions to attempt adding to his growing Derby trophy shelf.

Céspedes started slowly in the Monday night defense of his crown, launching only three over the outfield wall in the opening elimination round and needing a three-hack swing-off to break a deadlock with Oakland teammate Josh Donaldson. But then the fireworks began as the Cuban slugger humbled Baltimore’s Adam Jones by a 9-3 margin in round two and overpowered AL Derby captain Jose Bautista 7-4 in the semis. Bautista had put on a 10-homer fireworks show in the opening session to earn a round two bye, but the Blue Jays outfielder couldn’t match that earlier effort against the renewed confidence displayed by Céspedes. On the National League side Cincinnati’s Todd Frazier earned a surprise ticket to the finals despite only smacking one dinger on his own semifinal showdown with Miami’s Giancarlo Stanton. Stanton lit up the crowd with the night’s only 500 foot blast in round one but couldn’t lift even a single long fly ball in the crucial showdown with Frazier.

It was a true feast or fame night for the pair of Cubans in the competition since Yasiel Puig failed rather miserably and didn’t come close to keeping pace with his countryman or anyone else in the ten-man field. Puig disappointed mightily in the opening round, rushing his swings and quickly lining seven outs to various parts of the infield and outfield without once connecting for pay dirt. Puig’s only long fly was a loud foul ball out into the left field corner stands and he was thus the only slugger on the field who failed to blast at least one crowd-pleasing homer.

Céspedes found himself leading off the final round championship matchup after losing a coin toss to determine the batting order versus Frazier. Now fully warmed to the occasion, the Cuban wowed the sellout 40,000-plus crowd with nine smashes to deep left and center field, six reaching the upper deck and all but two measuring 400-plus. Frazier could answer with only a single smash in a finale that seemed all-but-determined from the opening Céspedes moon shot. Céspedes in the end accumulated 29 long balls overall, three short of his winning totals last summer in New York’s Citi Field.

In his moment of triumph Céspedes spoke before the ESPN cameras about his true love of performing in the limelight and also of his pride in demonstrating the quality and achievement of the new breed of Cuban diamond stars. But once again his achievements (certain to launch a new wave of national pride in Havana and his native Granma Province, and all across the baseball-loving Cuban nation) spoke far louder than words. No matter what roles Céspedes, Abreu, Chapman, Ramirez and Puig may eventually play in tonight’s actual showcase ballgame, Cuba has already made its historic mark on this year’s Minneapolis All-Star Game festivities.