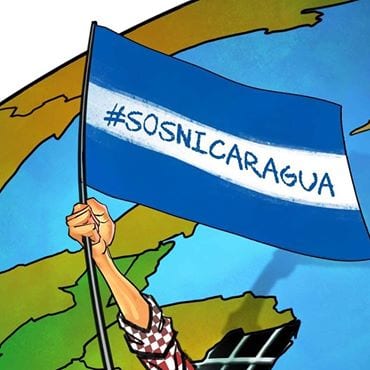 The theme of the meeting was recent US intervention in the two countries. The event was not public, and invitations were issued to those who applied. However, four Nicaraguan residing in Ireland were refused invitations, while all Irish applicants were invited to attend.

The meeting was attended by about 40 people, mostly trade unionists. The ambassadors blamed current social unrest in both of their countries on US intervention. All mentions of anti-imperialism were greeted with applause. Four members of the Irish Nicaragua Solidarity Campaign asked questions about the repression in Nicaragua, without receiving satisfactory replies.

The members of the INSC handed the Nicaraguan ambassador a letter signed by 54 former brigade and solidarity activists calling for an end to the repression and early elections. A version of the letter was published in The Irish Examiner.

Open Letter to the Ambassador of Nicaragua to Ireland

We are among the hundreds of Irish people who have worked in solidarity with the Nicaraguan people, supporting the achievements of the Sandinista Revolution and resisting outside attempts to undermine them. Most of us have had the opportunity to travel to Nicaragua to express this solidarity through practical work and to get to know the people and the popular movements which they have built.

We wish to express our serious concern about the violent repression of unarmed civilian protesters in Nicaragua.

Many of us in Ireland are in regular contact with Nicaraguan friends and community who are living in terror, afraid to leave their homes, are in hiding, or have had to flee the country in fear of persecution. A refugee recently arrived from Nicaragua states that “Nicaragua is not safe for those who think differently from Ortega and Murillo. I cannot return to my country because I think differently, and I cannot express myself peacefully as a citizen concerned about the direction in which my country is heading”.

We welcome the recent release of large numbers of political prisoners but are aware that a further 89 prisoners have not yet been freed. Furthermore, the cases against those who have been let out of jail have not been withdrawn. We are worried by the continuing repression and harassment of opponents of the Government, including former political prisoners.

Through you, we call on the Nicaraguan Government to immediately end violent repression by police and paramilitary forces; to end arbitrary detentions and torture of protesters; to release all remaining political prisoners; to organize free and fair elections, under strict national and international observation; and to ensure justice for victims through the investigation, prosecution, and punishment of those responsible for all the acts of violence committed during the protests.

We will continue to support the popular movements which uphold the spirit of the Sandinista Revolution and we will continue to oppose any threat by the US to the Nicaraguan people’s right to self-determination.

We look forward to Nicaragua becoming again a beacon for people suffering from repression and struggling for change around the world, as it was in the 1980s.

This letter is also supported by eight Nicaraguan citizens, including refugees, living in Ireland.