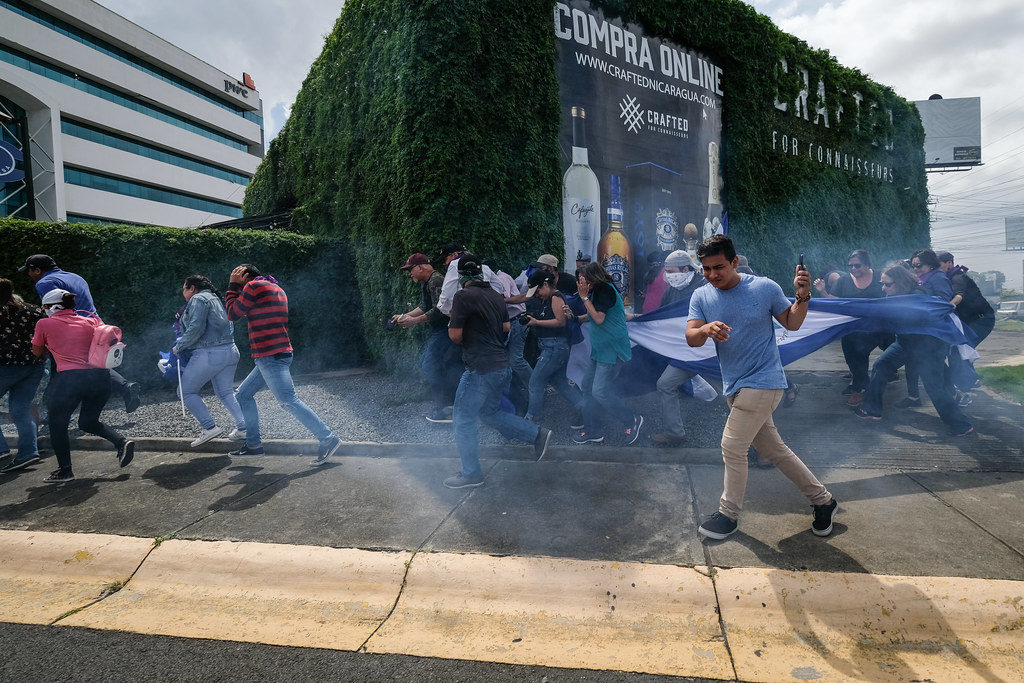 HAVANA TIMES – The Ortega-Murillo dictatorship rejected this week the latest report presented by the Office of the United Nations High Commissioner for Human Rights (OHCHR), in which Michelle Bachelet asserts that repression in Nicaragua has continued since 2018, in spite of the political dialogue between the government and the Civic Alliance for Justice and Democracy.

The OHCHR report not only contains human rights violations occurring between April and September 2018, when all citizens’ protest were prohibited by the police, but the United Nations organization also presents the new phases of repression imposed by the de facto state of siege. These include arbitrary detentions and arrests, the limiting of the right to freedom of movement, and the use of the judicial system as a means of repression against the opposition.

“The period covered in the report (from August 19, 2018 to July 31, 2019) should report on the current situation and not go back in time to events which occurred prior to August 19, 2018,” asserts the Ortega government, a position which implies government acceptance of having crushed civic demonstrations. “The OHCHR fails to comply with the mandate of the Human Rights Council by insisting on including information on events that occurred in the past,” complains the dictatorship, in their response to the report.

The Ortega-Murillo regime expelled the OHCHR from the country in August of 2018. However, the office, led by Bachelet, continued its constant monitoring of repressive events in Nicaragua.

“Arbitrary detentions and arrests continued to be a means of oppressing dissident voices, despite the return to national dialogue. Cases of torture and abuse of prisoners in circumstances related to the protests persisted,” noted the United Nations organization.

In its response, the dictatorship – accused of committing crimes against humanity – refutes the report of the organization headed by Bachelet, arguing that “the methodology cited by OHCHR for the gathering of information neglects to report how it acted with due diligence. The identification of sources and gathering of information was carried out based on biased and arbitrary criteria, yielding a report without proper methodology.”

“This report also reiterates the regime’s lack of willingness to investigate grave crimes that have occurred. The report ratifies that Daniel Ortega’s government is a violator of human rights on a universal level,” stated Carrion.

“We needed a weighty report such as this one by the Office of the High Commissioner (of the UN), to be added to the reports produced by the Inter-American Commission on Human Rights (IACHR), on all the actions that have been recommended; as well as a call to end the repression and the police state that rules in cities and which has now been introduced into schools and universities. Obviously, lying and trying to deny the evidence and evade the requests of international organizations is a tactic that will sink Ortega even further, and result in more pressure,” said university student, Lesther Aleman, of the Civic Alliance.

Bachelet’s team cautions that the justice system (loyal and obedient to the Ortega machine) has been used to criminalize dissidence and guarantee impunity for those responsible for human rights violations.

“A review of some of the criminal proceedings against individuals who were detained within the context of the protests has also brought to light deficiencies and notorious inconsistencies with international norms and standards of due process in the application of Nicaraguan criminal law,” the team stated.

During the period analyzed, the OHCHR confirmed that at the start of Nicaragua’s socio-political crisis the principal civil rights groups were attacked, adding to other measures taken by the regime against non-governmental organizations that operated since long before the crisis.

The UN decries the cancellation of the legal status of nine NGOs critical of the government. Included in the nearly 200 interviews carried out by Bachelet’s team for their report is that of the former Supreme Court Judge, Rafael Solis, who admitted that “the charges against those involved in the 2018 protests were politically motivated and that fearing dismissal, judges issued sentences in line with the government’s position.”

The government disagreed, insisting that the “nine associations had lost their legal status for violating their purpose and objectives, using their organizational framework to organize, receive, channel and make available funds for committing illegal acts related to the attempted coup against the government, in violation of their own statutes”.

The police state is incompatible with international norms

The report classifies the police state imposed by the regime as being “incompatible with applicable internationals norms and standards”.

“(Their methods) are disproportionate for controlling gatherings numbering no more than 100 people. The right of peaceful assembly should not be subject to previous authorization. It can only be restricted in accordance with the principle of proportionality to maintain and protect national security, public safety, public order, physical or emotional wellbeing or the rights and liberties of others,” states the report, referring to police refusal to allow protests to be carried out by the civilian population.

According to the High Commission’s analysis, “a great number of police officers were observed in urban zones, and in particular, shopping centers, court houses and catholic churches, and the areas around them.”

“This unusual, massive deployment (of security forces) had an intimidating effect on those who wanted to protest peacefully. Police repression of protestors, along with attacks by armed pro-government forces, proved to be an effective deterrence resulting in the cancellation of many protests, or the decision by protestors to separate into smaller, less numerous groups,” said the report.

The final report of the Office of the High Commissioner for Human Rights also warns that the most recent phase of repression against people critical of the regime can be characterized as a “violation of the right to freedom of speech, of association and of peaceful assembly.”

“Government officials have resorted to using rhetoric to discredit and attack human rights defenders, journalists and those critical of the government. This situation has led to a continual and notable reduction of opportunities for civic involvement,” states the report.

The Ortega-Murillo dictatorship alleges that repression of protests throughout the country was a legitimate response to a “failed coup d’état”, denying any responsibility for human rights violations.

The government’s criticism of the OHCHR report ends by sustaining that the report “is unacceptable (…) and attempts to bring about profound transformations to the highest State structures and its legal system, which are integral to the nation’s independence, sovereignty and self-determination,” adding, “The report displays a tendency toward direct intervention in the country’s internal affairs by attempting to subordinate national institutional structures to the guardianship of international organizations”.

Nevertheless, the OHCHR report sustains that the regime’s attitude “reflects the lack of willingness to be held accountable, and reinforces impunity for human rights violations, denying the right of victims to justice, truth, reparations and guarantee of non-repetition. It also undermines, yet again, public confidence in State institutions.”

The UN recommends that the government of Nicaragua annul the regime’s Amnesty Law, and that it carries out an investigation so that those responsible for human rights violations, which include summary executions and torture, are brought before the courts and that they are punished for their crimes.

Bachelet recommends disarming and disbanding the armed, pro-government groups, i.e., paramilitaries, whose existence is still denied by the head of the army, General Julio Cesar Aviles.