Ortega can continue to impose a state of siege for a few more months, but the only thing he will achieve is to accelerate further the destruction of the country 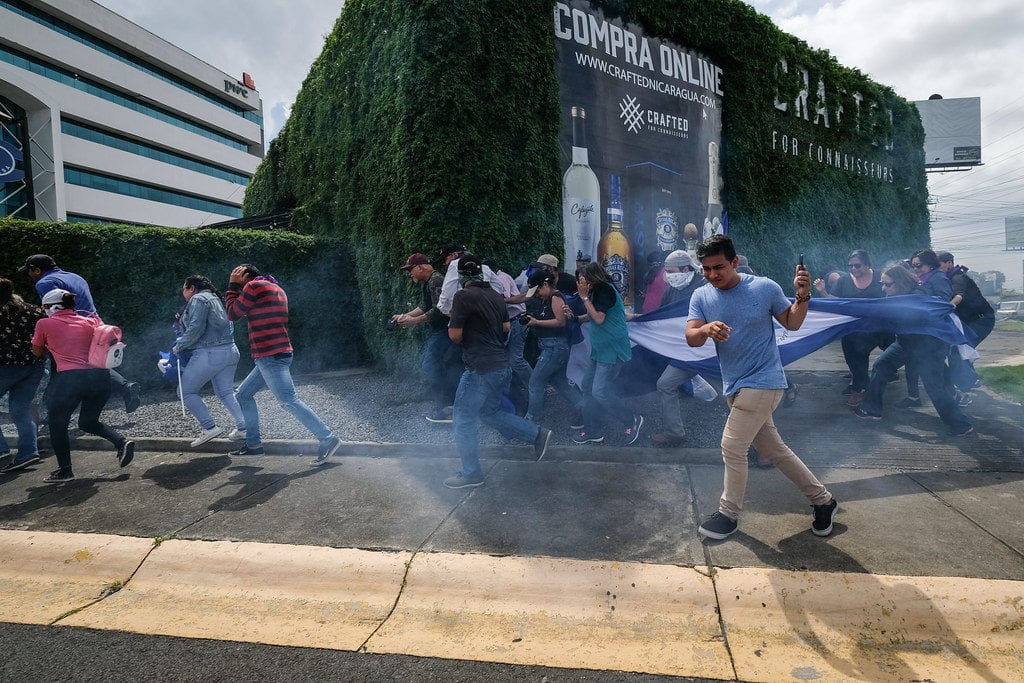 HAVANA TIMES – Daniel Ortega’s regime confirmed Thursday that the President of the Republic does not govern in Nicaragua. Instead, he orders and commands, as the supreme chief of the National Police, who remains in power through a police state.

The deployment of hundreds of riot police to prevent a peaceful demonstration on July 25th, called by university students to commemorate Student’s Day, is not a sign of legitimacy or strength of the Government, but rather it means a new political defeat of the de facto state of siege. Because despite the tear gas, pellets, detainees and the abuse of the police force, the dictatorship failed to stop the resistance and the demand for free elections and that university autonomy be restored.

This new political majority does not accept as normal the existence of “two Nicaraguas,” the official one that does have rights to mobilize and the other, without rights and without justice, a prisoner of the dictatorship. Everybody here saw two weeks ago, for example, when Ortega organized a transport caravan to celebrate the Retreat to Masaya [that took place 40 years ago], guarded by hundreds of police officers. Then, on July 19, (anniversary of the 1979 Sandinista Revolution) he again mobilized tens of thousands of his supporters and public employees, to the official act of that day, broadcasted on national television.

However, when university students, self-organized peasants or business chambers, notify them that they are going to march, or even when the mothers of the victims of the repression announce that they will celebrate a mass for their dead, the regime crushes their constitutional rights and represses them with violence.

Ortega also acts as the de facto chief of the paramilitary forces that unleashed the fateful “Operation Clean Up” a year ago, leaving dozens dead in Carazo, Masaya, Managua, Leon, Chontales, Estelí and Jinotega. The paramilitaries represent the greatest danger to national security today, and to the country’s governance in the post Ortega era.

Therefore, given the national and international claim that the Army must disarm and dismantle irregular forces, in accordance with the provisions of article 95 of the Constitution, the assertion of the head of the Army, General Julio Cesar Aviles, that “there are no paramilitaries” results implausible.

The alignment of General Aviles with Ortega, trying to defend what is indefensible, distances itself from the promise of non-intervention that the military institution had maintained, and generates more questions about the role it could play in an extreme situation, or in the face of an inevitable democratic political transition.

Fifteen months after the April Rebellion, Nicaragua has reached a point of no return where, in spite of the massacre, imprisonment and repression, Ortega has not been able to break the civic resistance that demands his departure from power. His proclamation on July 19th, ending the national dialogue, ruling out early elections, and offering a cosmetic unilateral electoral reform by 2021, does not represents a national solution, but the prelude to more repression.

In fact, Ortega can continue to maintain the state of siege for a few more months, but the only thing he will achieve is to accelerate the destruction of the social fabric of the country and the collapse of the national economy that is already transitioning from recession to depression.

The alternative to stop this crisis of national confidence and face its economic, social and humanitarian costs, lies in consulting the population at the ballot box. The first step consists in reforming the electoral system, from the leadership to the voting stations, to eliminate the party control exerted by the FSLN, restore power to the citizens and their confidence that each vote is counted with impartiality and transparency.

It is imperative, therefore, to change the magistrates of the Supreme Electoral Council to convoke free elections with national and international observation in the shortest possible period, in 2020, presidential, legislative, municipal and Central American Parliament elections —all on the same date—, so that the popular will is expressed about the solution to this national crisis.

And the only way to achieve an electoral reform is to exert more civic pressure, as the released political prisoners are doing, who are now a new political force. More economic pressure from large and medium size business people is needed to persuade the civilian, economic and military bureaucracy about the unfeasibility of the Ortega regime. At the same time, more diplomatic pressure from the international community is needed, to restrict the flow of external economic resources to the dictatorship. A simultaneous national and international pressure to restore the negotiations between the Civic Alliance and the regime, with the participation of the Organization of American States and international guarantors.

But the recomposition of the Electoral Council and the advancement of the elections can only be possible if the Civic Alliance and the Blue and White National Unity manage to relaunch themselves as a new national political coalition. Neither the inertia of the economic crisis, nor external pressure alone, will force the dictatorship to negotiate a political solution. The third and final national dialogue, with or without Ortega in power, can only come about from an electoral political policy bolstered in the recovery of the right to freedom of mobilization.

One thought on “Nicaragua: Political Reform and Elections in 2020”