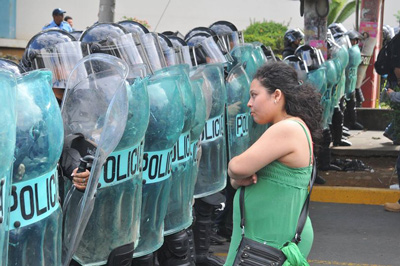 “They are afraid of us because we are not afraid,” shouted the women in a chorus a who tried to break the siege of the riot police, supported by activists of the ruling FSLN headed by Daniel Ortega.

Leaders of the Network of Women Against Violence reported that units of the National Police tried to prevent the passage of several buses that were bringing people to the march in the capital from the northern Nicaraguan departments of Matagalpa and Esteli, and Chinandega from the northwest.

The march of Nicaraguan feminists and human rights advocates was confronted by activists of the Frente Sandinista and government employees who were transported to the vicinity where the feminist demonstration took place, on the pretext of their own celebration of International Women’s Day.

During the march the women read a statement in which they noted that “the path has been strewn with obstacles to silence our voices, preserve patriarchal power and block the changes we propose to eliminate inequalities.”

“Feminists have endured disrespect, a lack of recognition and exclusion by the authoritarian state, politicians and economic elites acting on behalf of a republic of and for men, in the name of fundamentalist religions and macho traditions,” the statement said.