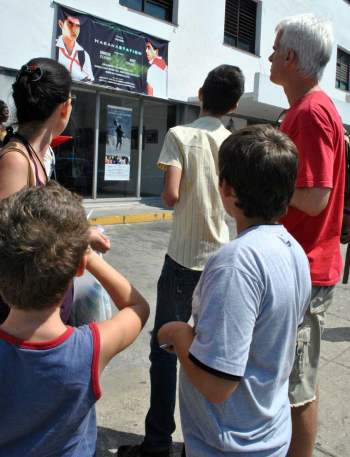 HAVANA TIMES, August 20 — Thanks to the surge in piracy, I didn’t have to get in line to see the new Cuban movie Habanastation.

This meant that neither did I have to put up with the heat of a theater in the tropics that lacks air conditioning, like the Payret Cinema in the heart of the Cuban capital.  In any case, I’m sure that under those conditions I wouldn’t have made it halfway through the film anyway.

From the first scenes, I found the manipulation of Cuban life so suspect that I doubted that the subsequent course of the film could save it from that initial elementary lack of sincerity.

It wasn’t only that morning in the elementary school where, for example, the children sang the national anthem with unbridled enthusiasm.  I know that since my son began his life as a student (he’s been in four different schools) there is a widespread tendency to “whisper” the words of the national anthem (known as the Bayamo Anthem).  In fact, the majority of students even “dub” the words, meaning they only move their lips.

I’ve even verified this when passing by rows of students assembled in the courtyards of other schools.  There’s a general apathy that reigns, a glaring absence of energy in the execution of that rite.  On more than one occasion I’ve witnessed outbursts from some educator — hysterically outraged — demanding: “More enthusiasm!  More drive!  More revolutionary fervor!”

I know that there’s no rule without an exception – but so many?

In the film, children hardly ever say bad words…even in the poor neighborhood, where the reproduction of that environment spans from the timorous to the grotesque and never approaches anything close to reality.  Not one single time did I hear the word “pinga” (the Cuban “f” word), which today is almost a national mantra.

I remember that in her book Variedades de Galiano (Galiano Street Five & Dimes), Cuban writer Reina Maria Rodriguez described how when she was writing near the near the Deauville Hotel, in Centro Havana, she heard so many “pingas” around her that she couldn’t keep from reflecting them in her work.

In the movie, I perked up when the young teacher shows deference to the rich boy.  That was something I’d always seen; it had been the basis of undeserved grades and preferential treatment.  But this apparent acquiescence, this rich portrayal of weakness in human behavior, slowly dissolved as the film went on.

To complete it all, the film showed a bus depot like none other I’d ever seen, with buses that were more than clean, they were indeed…sparkling!  And there was a May Day march that looked like the ones meticulously choreographed on the news.

The opinions of two teens

Here I’ll list some of the comments I heard from my 14-year-old son and his slightly younger cousin, who both watched the movie with me.

In the scene where the technician tells the children the price of the PlayStation piece that needs to be replaced, they said:

In the scene where the technician tries out the repaired PlayStation, he says: “This is one of those first generation Ataris that I used to have!  And the graphics are “de palo” (ancient).

By the way, the character of the technician is also a praiseworthy exception, so ever-available and different from those “sharks” that so many people complain about – the ones who are able to strip down any piece of equipment if you’re naive enough to leave it in their hands for more than a few hours.

Then too, there’s the scene where indigent Carlos tells the little rich boy Mayito about the incident that led to his father’s imprisonment.  When the boy explains that his father went after a man who had offended the youth’s grandmother, Mayito asks, almost affirming, “So your father ran didn’t he?

“That’d be out of a cartoon!” (meaning unlikely), replied Carlos to silver-spooned Mayito.

But no little boy would ever ask that, not even if he was a bitongo (a mama’s boy).

It’s true that it is human to be scared, but it’s even more human and more common to fake the fact that one isn’t.

To add to the list of anachronisms, I can attest to the truth that I don’t know one single kid who’s interested in saving up money to buy a kite – maybe an MP3, a bike or even an iPod…but a kite?

Commenting about the end of the film, where the rich boy gives his PlayStation to the poor kid, my nephew could only say, “Wait a minute, that’s not Cuba, no way.”

A postcard in reverse

One has to wonder why he said that if we’ve all read “Los zapaticos de rosa” (when we were in elementary school, and some as adults – voluntarily), that memorable poem by Jose Marti that can still bring tears to my eyes when I think about it conscientiously.

But in those verses, the poet’s soul reflects with the whole weight of his pain over a divided Cuba, over a suffering class that Marti felt as a physical wound and for that reason he gave up his privileges to a comfortable life.

Like in Martís poem, this transformation, this raising of the consciousness of this spoiled girl who gives her favorite shoes to a girl who is not only poor but moribund, all of this has the weight and power of a legitimate drama.

In art, like in life, instinct cannot be deceived.  In that sense, the main characters of Habanastation — with their improbable gestures, their foraging around for naturalness and even their feigned anger — they all seemed unreal to me.

I sensed a tremendous lack of spontaneity, something I generally feel about all children’s programs, which exactly what makes kids prefer a “PlayStation” to a space conceived for them.

Why was the poor boy’s father imprisoned practically by chance and not for really being a criminal? I suppose this wouldn’t fit with this prudish Cuba where class differences are a mere pretext for saying that reconciliation is possible, and only in a few hours.

Despite the merit of the photography and the rhythm, peppered with very good moments of a novel sound track, the movie is a blend between intentions and cold reality.  The portrayal of the marginal “La Tinta” neighborhood (a take-off on the Havana neighborhood of “La Timba,” and where almost half of the plot unfolds), left me with the displeasure of those soap operas that are a jumble of crudeness and sentimentality.

One doesn’t feel the oppression generated by overcrowding and created by forced coexistence.  Instead, there’s a true solidarity, but one that has passed over the edge of an uncertainty and violence that’s no child’s game.

“Poor but happy” was the phrase used by cinema critic Enrique Colina to define the stereotypical class without privileges that was reflected in the movie Titanic, and here it fits perfectly.

The problem is that this “La Tinta” lacks spirit, breath or substance.

It’s in this marginal milieu (where even the dirt seems manipulated) that the story soon almost takes the course of a spaghetti western.

In a few hours the rich boy learns the rules of poverty, he becomes conscious of his selfishness, he falls in love, he rescues his instant friend with a fabulous gesture in a fight (which also makes him seem to be at wits end), he kisses the girl and he’s finally redeemed by giving away the PlayStation in an ending that’s happy and predictable but falls well short of being sublime.

I’m left with the discomfort of having watched a country that I don’t recognize, despite the splashes of “reality.”  In the end…is the lesson that, despite all appearances, “the poor can be happy”?  Or is it that deep down it’s the rich who are unhappy?

There’s nothing in the movie about the ferocious struggle for the well-being that almost everyone dreams, despite imposed austerity, especially among those of the younger generation who’ve inherited a society without ideals and who only aspire to “leave” to begin their lives…

It hurts me to think that these Cuban children (especially those to whom the movie is dedicated) are not in the film.  These are the children who deserve a country where what they truly suffer — from the material shortages to the double standards that are instilled in them and that they reproduce — can be reflected in movies dedicated to them.

4 thoughts on “‘Habanastation,’ or a Bad Version of the Little Pink Shoes”