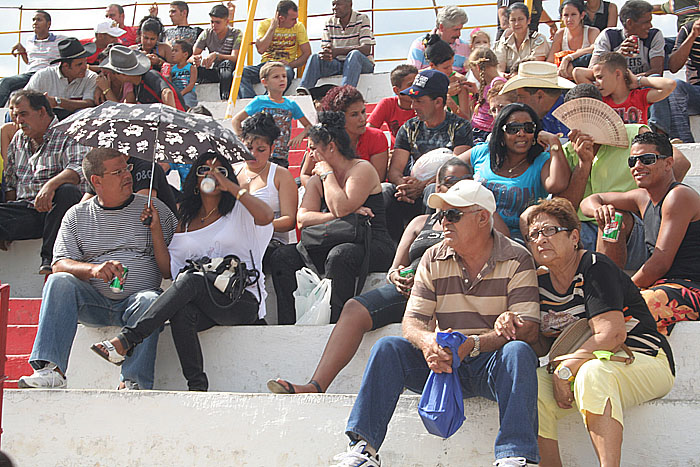 HAVANA TIMES, June 23 — Since the time of the French Revolution, politics has usually been classified in terms of left and right.

In the 1990s, when doomsayers began to predict the end of everything — history, borders, geography and politics — they also predicted the end of that political classification.

However nothing indicates that this distinction has disappeared, not even when the “center is expanding.”

The only things that have changed are the settings and a speed that surpasses our capacity for perception. I believe that it will continue like this for long time, at least here in the western world.

Perhaps a way to approach the matter is to return to [Norberto] Bobbio, where he identified the left as a political paradigm characterized by two conditions: substantive equality and participation.

As a consequence, he supposed overcoming markets as well as representative democracy. Relating to the first condition, he opposed planning and action by the government or communities, and as for the second he opposed direct democracy, which had its highest expression in an advisory role.

As for the other end of the spectrum, he identified the right as a political field that fixes its attention on inequality as the motor of economic development (consequently he also looked at social welfare) and of representative democracy.

Seen this way, the right prioritizes the market as the mechanism for resource allocation rather than governments and communities. At the same time this limited participation to what Schumpeter defined as an institutional arrangement and a method based on the laws of the market applied to politics.

Of course these are identifications of tendencies, meaning that more positions than these indicate degrees through which political actors move, and therefore these are always subject to deviations.

In the real world, for example, the left has incorporated in its position the use of representation and parliamentarianism in the same way that the right has included different modalities of direct democracy. However the distinction continues being valid if we refer to what each tendency considers the basic principle of the framework of politics. 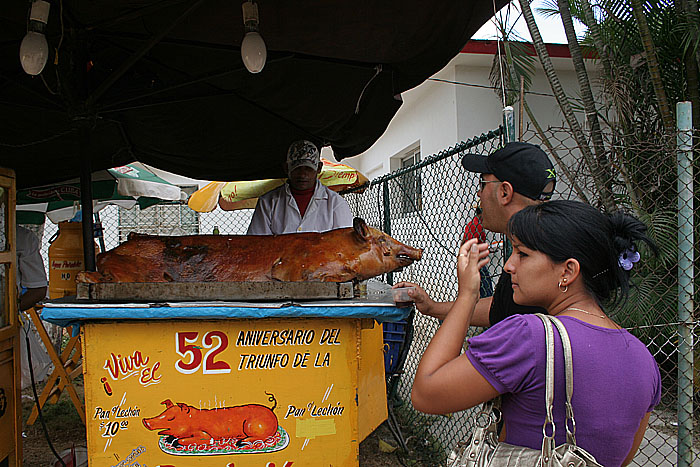 This is also in contrast to the most diffuse political machinery of the hardline Cuban exiles who establish “politically correct” norms in their circles in exile.

In what is fundamental one can refer to how these actors do (or don’t) in fact recognize the Cuban government’s levels of legitimacy, relevancy and capacity to produce desired changes within the reality of the island.

This means that it is not enough to see the existence of a left and a right. Rather, it’s vital to recognize how these positions are organized with respect to the Cuban system.

Confusing these two axes can involve identifying as leftists those who really aren’t simply because they tend to recognize virtues in actions implemented by the Cuban government.

Alternately, we can mistakenly identify as right-wing those people who maintain a distance from that self-proclaimed socialist government, even though they hold left positions.

Another particularity is that due to the peculiar repercussion that the United States has in all of this, as well as the weight of Cuban nationalism in the post-revolutionary national political culture, the left/right distinction mixes with another dilemma that has to do with the way the probable role of the United States is perceived, particularly its policy of blockade/embargo, although there are other international actors such as Venezuela, the European Union, etc.

Let’s imagine an axis of coordinates in which the vertical axis corresponds to the right/left latitude (X) and the horizontal axis to the pro and anti-government latitude (Y). These axes generate four fields that can be identified in the following manner: 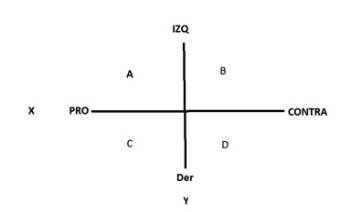 Field A: This contains those who tend to identify themselves with values of the left and who consider the Cuban government and the political class as legitimate representatives (par excellence) of island society. They grant them a leading role in the future of the island and, consequently, they see them as privileged representatives.

In the same way, the prevailing political line or discourse of the Cuban political system is seen as perfectible, even when perfectibility can be remitted to cardinal questions or details. But even when they believe that substantial changes are required (and therefore they engage in highly intense levels of criticism) they do not believe there exists enough promising indications that the system can rebuild itself into a superior leftist alternative.

Another point of common discourse in this field is to see the United States as a false actor that should be excluded completely from internal Cuban politics. For easily understandable reasons, this is the field with the largest audience of actors of those who live on the island. It is also the one that benefits, with greater or lesser tension, from the Cuban government’s meager political tolerance.

Field B: This is a sector that tends to identify itself with the values of the left but its members have differences with the Cuban government from dissimilar critical positions as well as with any form of US interference from an anti-imperialist perspective. They do not consider the Cuban government to be a privileged voice; rather, they center their attention on other actors located within what is called “the people.” This is a field that is not so large but is growing due to the increase in the number of people who have differences with the Cuban government’s authoritarianism and the pro-market reforms that it’s promoting.

Field C: Those in this sector tend to identify themselves with the values of the right but they consider the Cuban government and the political class as suitable and indispensable factors for an orderly transition. They hold positions in support of market reforms in Cuba and for the demo-liberal formalization of the political system when those economic reforms begin to bear fruit.

From their perspective, the intensification of market relations will produce an activation of autonomous actors and a strengthening of civil society to the benefit of democracy. They admit the need to improve relations with the United States, but through negotiations between equals.

Field D: This covers those who tend to identify themselves with the values of the right and who differ fundamentally with the Cuban government, which they do not consider a legitimate representative, unless it were to prepare a political opening and consequently its own negation as the reigning political class.  This is the field closest to the exile community, particularly those in their capital city: Miami.

On this point it’s worth recalling two considerations:

1) The first is that these fields can never be considered groups of opinion. In each one of these fields there proliferate specific positions that include softliners and hardliners, those who favor dialogue and exile commandos from the Everglades, social Christians and social democrats, anarchists and liberals.

Whether the actor or person is harder or more open on each issue, their location will shift along the axis’s. But in each field there exists a series of hard discursive nuclei of people who anchor their positions in relation to the issues mentioned.

2) Generally, those Cubans who express themselves publically (in the press, through art, in academia, etc.) and are among those who tend to group themselves in fields A and D, though with varying shades.

This is the result of over a half century of polarization of the national political scene, the existence of mechanisms for political socialization that permanently reinforce this polarization and the existence — in Miami just as much as in Havana — of norms of “politically correctness” coercively employed against certain types of behavior (though obviously this is done in very different ways in exile and in Havana). 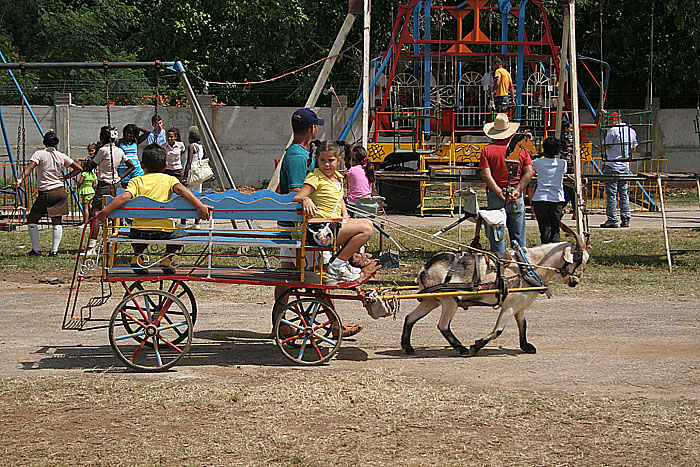 I should emphasize that I’m speaking of people who express themselves and how they express themselves. If some of them have hidden agendas that will be uncovered some day for the “good of the homeland,” that cannot enter into my calculations.

Hidden agendas can be very effective in politics, but they don’t shape public opinion if they’re not uncovered.

But it’s predictable that if relaxation is produced due to factors like some level of political opening on the island or improvement in relations with the United States, membership in the respective fields would be redistributed, with increases in the numbers of people on the right who support the Cuban government and on the left by those who would oppose it.

In fact this is already happening. Since Raul Castro assumed power and began to move the economic agenda slightly — with indispensable political changes so that the economic changes will function — greater enthusiasm is visible among Cubans who cannot be considered left and who at most would be located on the liberal social fringe (the left border of the liberals).

Likewise there has been the rejection of leftist critics, those in the country as much as those in exile. This will inevitably lead to decreases in the fields A and D, and to the generation of a more favorable setting for dialogue and agreement.

A good exercise would be to draw an axis of coordinates just as I described and to locate in those fields ten well-known Cubans who express themselves openly. One could then imagine how they would act if there didn’t exist coercive mechanisms (the police as well as political, ideological or economic means). The setting would be completely different.

It’s certainly better for imagining the republic of the future without exclusions.