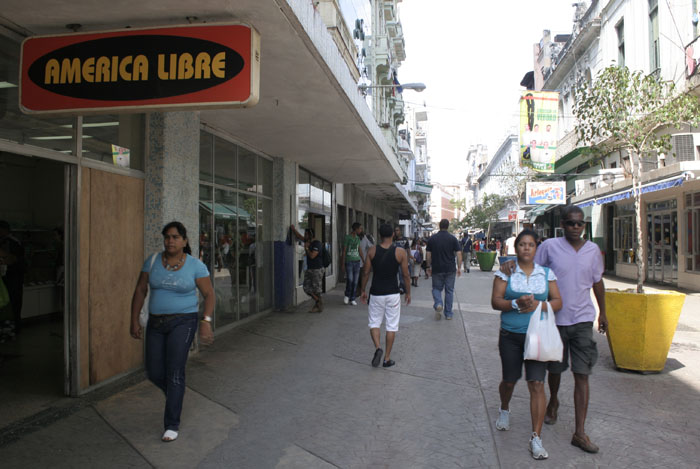 HAVANA TIMES, May 16 — I would like to be able to tell you that Adela is one of the lead characters on one of the soap operas that comes on Cuban television or that she’s a main figure in a short story of any contemporary author, used as a reference to talk about aspects of real life in Cuba today.

But that’s not the case.  Adela is a real woman, a native of Guantanamo Province with the same concerns of any younger person.  She has the same problems that confront the island’s population due to a stagnated economy unable to provide relief for a population accustomed to excessive shortages.

The difference is that this young woman is confronting a new situation that has turned her world upside down, made her quickly lose weight, robbed her of her sleep on several occasions, and — what’s worse — has taken away the few hopes she had left.

Adela was born into a low-income black family.  Her father was a carpenter and her mother worked in a cafeteria for a while, at least until the birth of the last couple of kids complicated things and it made more sense to work as a housewife and sell a few things to survive.

Ever since she was little, Adela promised herself that she didn’t want to have to make the same sacrifices as her mother.  She committed herself to becoming a professional, and she did just that.  Fortunately, she was not the only one of her their five siblings who achieved that same status; in fact, only one of them never went to college.  Adela was a sort of inspiration to the younger ones, who always saw in her an example to follow.

Not even the difficult weekly trips to Santiago de Cuba, excessive shortages of a large family with little money coming in, or her average intelligence — which forced her to study more than the rest of her classmates — made her desist from her aim.

She graduated in 1996 and immediately began working for a company where no incentives were paid, neither in domestic currency nor hard currency.  Those who work there are either people who have no other alternative, those who are very needy, or those who really love their professions.  Adela was a little of all three.

Over the course of her 15 years there, she saw a parade of different administrations and executive directors – efficient ones, embezzlers, self-centered ones…a little bit of everything.

After having her two children, life started to get a little complicated.  The kids would sometimes get sick, or other people would have to take them to school or to play sports.  In short, she had all the obligations of a concerned mother, but she never stopped being a responsible and efficient worker.  She was always ready to work hours extra for no additional pay and willing to help out with any task, even if it was outside of her job description.

A few weeks ago she and several co-workers were laid off by the company and with no alternatives offered to them.  All of them began trying to start some kind of little business or look for employment on their own.

Our country needs to put measures into practice that lift our economy for once and for all.  Obviously if we keep three workers in positions that only requires one worker, we’ll never be able to achieve that.

But if after 15 years of work someone tells you that you have to go home because the company is over-staffed, that’s going to be very difficult to understand.  Right?  Especially if you live in a socialist society that’s supposedly is equitable and fair.

One thought on “Another Cuban Out of Work”