HAVANA TIMES – Today, almost 22 years of age and thinking 14 or 15 years ago, I remember when I met David Berenguer. He lived in my neighborhood and came to our house as my brother’s guest. His charisma and easygoing nature turned him into a family friend from that very first visit.

I can’t say for sure that he was a normal person. He was different to all the other young people on the block because of his free spirit, and a madman to anyone who couldn’t understand his happiness. As a child, I started going over to his house and over time, I soon became a kind of younger brother who learned from the older ones around me.

If I’m a writer today and appreciate the arts it’s thanks to having met David in part, who showed me this world and took me to the first rap concerts I ever went to at La Madriguera*, where he introduced me to the first artists who would later become my mentors and maestros.

David was an independent photographer and painter back then; he painted graffiti and was closely linked to independent projects and artists at the time. He worked in and supported performances by the OMNI-ZONAFRANCA group and at POESIA SIN FIN festivals. He also collaborated with the MATRACA group in the organization of the first editions of the PUNOS ARRIBA Cuban rap festival, creating prints for participants’ sweaters and recording the event.

All of these actions, in addition to his appearance which was different to our neighborhood’s standard, meant that he was harassed by the authorities, who threatened to lock him up more than once, finding legal recourse in the country’s Danger to Society Law.

In 2010, he left Cuba and headed for Spain where he started a new life as an immigrant, with all of the advantages and disadvantages this decision entails. In 2015, he returned to Cuba after his mother passed away and I remember he told us how he had bought a small sailboat that he hoped to take to the seas on and start traveling around the world.

It was an idea that made us all laugh at the time, and we thought it was very utopian. We laughed it off and didn’t take much notice.

Some years later, my brother tells me that David had traveled from the Iberian Peninsula to Las Palmas de Gran Canaria and that he was staying at his home with his wife Lara and other friends who were accompanying him on the expedition. The final destination? Cuba.

At that moment, I understood that what had seemed like a fantasy had gradually become reality and the friends we shared in common all kept up to speed on his journey on that sailboat which headed for Morocco and then towards Puerto Rico. Early one morning, my phone rings and David’s voice is on the other side of the line telling me that he had made it to Cuba and was heading towards my home.

It was completely unheard of but real, that small sailboat had crossed the ocean and a Cuban was returning to the homeland at a time when everyone wanted to leave. It was like a masterpiece of contemporary art.

His time in Cuba ended ahead of time because of hassle from port authorities at Hemingway marina who do as they please, the small sailboat headed for US territory.

There, David and his wife received a six-month tourist visa but were not allowed to work. Their main project was to dock, work to fix up the boat and carry on towards other lands.

These young people’s visas have now expired and they are being held by immigration authorities who are planning on deporting and separating them as they both come from different countries. Things are even more complicated in David’s case, because if he were to be deported back to Cuba, he wouldn’t have anywhere to live.

After his mother passed away, and he having lost Cuban residency, the only choice he and his family had was to sell the house before it got seized. Plus, he’s been living abroad for 10 years, with a completely different lifestyle and adapting to the hard life on the island will be really tough.

However, the hardest thing will be being separated from his wife who has followed him the whole way like a Dulcinea loyal to her Quijote. Not to mention the fact that he also runs the risk of being harassed by Cuban authorities again given his track record.

To the person reading this article, I ask you to please support the campaigns that have been organized on social media by artists such as David from Omni and other friends so that David Berenguer and his wife Lara are not deported and have the chance to fix up their boat so they can carry on their freedom route.
—–
*La Madriguera is a nightclub which took on the rap movement at one point and put on shows by different artists. 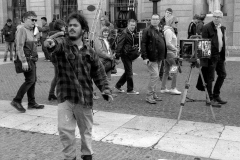 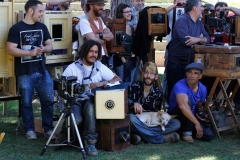 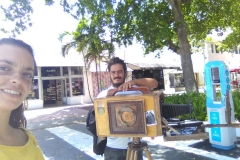 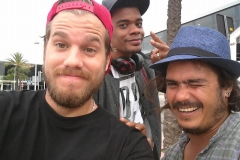 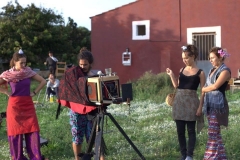 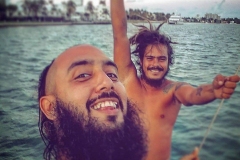 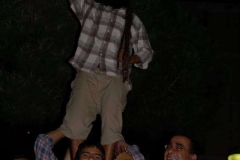 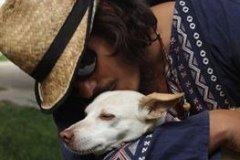 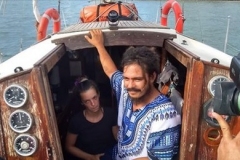